Big Buck Down on the Texas Prairie

The afternoon of November 6, I was running late to sit in the ground blind out on the prairie. Running... 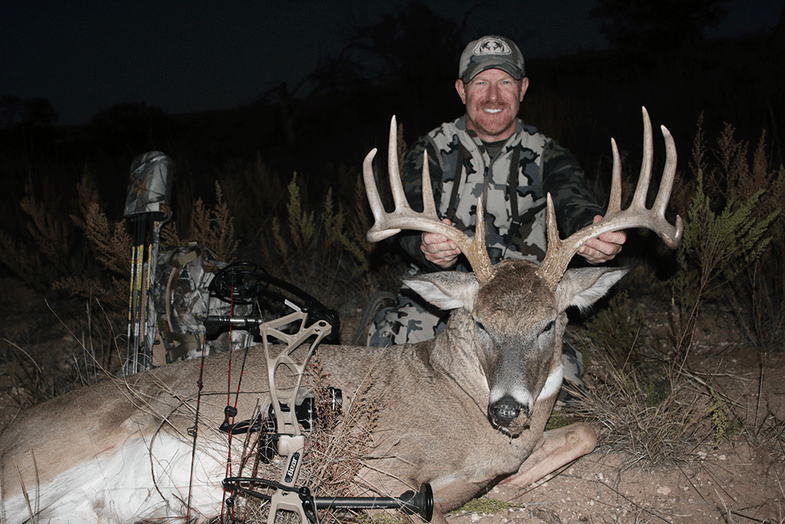 The afternoon of November 6, I was running late to sit in the ground blind out on the prairie. Running late seems to be a common theme on my hunts this year. Wind was out of the southeast, close to perfect. Temperature was about 60 degrees with clear skies. That ground blind sits on the edge of a sandy, dry creek that wanders through big, rolling hills covered with sage in the Texas Panhandle. It’s dotted with islands of trees and brush. There are more deer there in the open grass than you might think. My friend, Kurt, did the hard work, setting the blind, feeder and monitoring the trail camera. A wide, handsome 11-point had been visiting that spot since September. It was my third time to sit the blind for that target buck. The previous two attempts he was a no-show. I nocked an arrow at 4:45 PM.

The first visitor was a 6-point that came from the south at 5:10. He posed broadside at 25 yards. When his head peered hard to the south at 5:30, a broken-racked 8-point only slightly bigger came in. Both small bucks were often on the trail camera pictures with the big 11-point, so I stayed alert.

It was 5:50, right at sunset, when I caught movement up the hill from the feeder. A big-bodied buck was headed down the hill. Through my binoculars I counted 11 points, it was him. The mature buck strolled through the short brush like he was the boss. When he stopped broadside at 25 yards, I pulled to full draw, steadied my pin, and shot. He trotted 20 yards and stopped, blood pumping out of his chest. In seconds he was down in the short sage, kicking in the sand.

This was another one of those bucks from the trail camera that fooled all of us. His huge body, about 250 pounds live weight, made his rack appear smaller than what it is. His greatest spread is 22-inches. And his beams were more massive than they looked in the scouting pictures. His gross score is roughly 157-inches. A fine buck, taken in country that looks more likely to hold pronghorns than big whitetails.