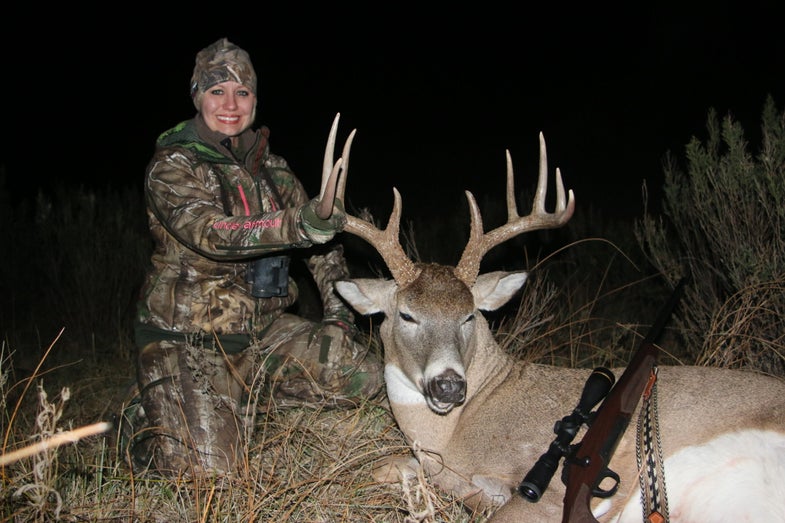 Overall Activity: The general gun season is now open in Texas. Kelley Sims, hunting in the Texas Panhandle opening weekend, reported, “It was like someone flicked a switch. The bucks that had been on the trail cameras only in the dark in October, were now at the feeders in daylight. At six different corn feeders, each one had a good-sized buck prowling for does in daylight.” Kelley shot a unique drop tine buck with his rifle the second day of the season.

Fighting: On November 7, hunters Kurt Stallings and Steve Lewis witnessed a serious fight in the Texas Panhandle. The two hunters were driving up to check a corn feeder in the morning. The two big bucks, one an 8-point and the other a 9-point, both around 130 to 140-inches, paused to look at the Polaris Ranger 100 yards away, both bucks’ mouths agape and panting like dogs. Then, they turned back to each other and locked antlers, pushing and shoving along the river bottom, ignoring the hunters. At one point the bigger-bodied 9-point had the 8-point down on his side, trying to kill him. The two bucks finally split apart and ran into the cover on the river.

Rub Making: On November 9, I watched a spike buck demolish a small mesquite tree. It was interesting to me how much damage a simple spike could do to a tree with a trunk the size of a broom handle, making me wonder how many times I’ve seen a decent-sized rub and assumed it was made by a big buck, when it could have been a very small one!

Chasing: Kelley Sims also reported several bucks chasing and cruising for does this past weekend. He said, “It was one of those days where you felt like you were just as likely to see a buck at 1 in the afternoon as you might at sunset. Bucks were on the move, searching.”

Daytime Movement: Multiple people have told me bucks that were only on cameras in the dark, now seem less shy of the daylight, at least in the northern half of the region where the rut seems to be getting started. A good reason to stay alert until the last blink of light is gone. A hunt is never over until that last minute of shooting light. A point proven on opening day, November 7, for Lisa Armbruster. After a slow afternoon sit that produced only the sighting of a doe and a fawn, Lisa started towards the truck with about ten minutes of daylight left. When she came over a rise, there about 120 yards away, standing like a statue in knee-high sagebrush, was a mature buck. The buck had seen her, but froze, a staring contest. Lisa steadied her Browning X-Bolt on tripod shooting sticks, lined up the buck’s chest in her Leupoldscope and sent a bullet from her .243 right on target. The buck went straight down. The big-bodied 9-point had massive bases and a beautiful cape. Lisa’s first-ever buck was a good one, destined for the taxidermist.

Estrous Sign: Does are being chased and bucks are starting to act goofy, at least in the northern half of the region.

X Factor: In the northern half of the region, now is the time to start carrying a grunt call and rattling horns everywhere you go. Daniel Heuston reported multiple bucks responded to rattling on opening weekend in Wheeler County in the eastern Texas Panhandle.

Cold, crisp mornings with some wind, not dead calm, are the times I’ve had the best luck getting bucks to respond to rattling. Watch your downwind side, preferably from some kind of elevation to spot a charging buck before he is right on top of you, as most deer will circle to get the wind before charging all the way to the sound of the horns.