Big Bucks on the Move after the Storm 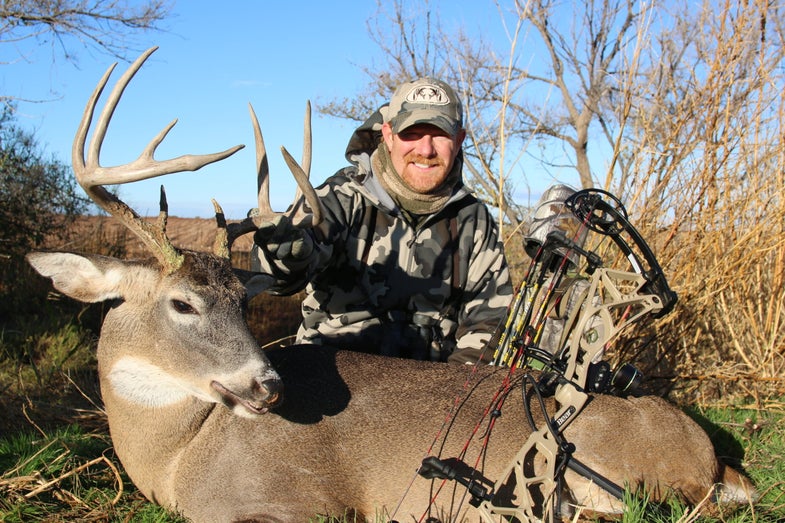 Overall Activity: I spent the last few days hunting with Oren Don Molley at Plaska Lodge near Memphis, Texas. Oren Don runs a first-class operation, in business for 20 years, managing thousands of acres of habitat to grow big deer, but so far this season the hunting has been tough. We faced warm temperatures, winds over 30 mph, hail storms, rain and tornadoes nearby. But every time I was in a stand, I saw deer. As many as 15, which is a lot for a Panhandle deer hunt. Buck activity was slow. For the first two days I saw only spikes, a 3-point and a 7-point, but all of those young bucks were trailing does, chasing them, grunting after them or acting just plain goofy in love.

The morning of November 17 was cold and windy after a storm passed through the night before. Winds were high, 20 mph at daylight and temperature was about 45 degrees. It was 7:10 AM when I spotted antlers coming over a small hill through the mesquites 70 yards in front of my ladder stand. The buck was grunting like a pig at every stride, head low and neck extended trailing a nervous doe. Through my binoculars, I counted nine points with long beams. The 4 ½-year-old buck loped over a barbed wire fence 35 yards in front of me, then continued down a two track road to trail a doe. At 24 yards I pulled my bow to full draw while grunting with my mouth simultaneously to stop him. He did just that, posing broadside. My arrow hit him in the heart, he spun around and jumped over the fence and back the way he came. Just 60 yards from my stand I watched him lay down and expire. The lesson for me from that hunt was how quick things can turn around. That same morning, another hunter in camp killed a small 10-point with a rifle, then saw a much larger buck after he’d already tagged out. I think the rut action will only increase over the next week or so in that part of the state as we get later into November.

Thanks to Texas’ MLDP (Managed Lands Deer Permits) program, which gives landowners more flexibility with deer season on their land in return for habitat improvements and strict management practices, I’ve been able to shoot four whitetail bucks this season. Two of those were taken on a MLDP property and the other two were taken on two separate ranches using the regular state-issued license. All of the ranches were low-fenced, free range, wild-as-hell deer. Texas has lots of deer, an estimated 4 million according to TP&W, with quality hunting statewide. I love to eat venison and love to hunt. I make no apologies for shooting multiple bucks when I get the opportunity or invitation to hunt with friends and neither should you. Anticipating deer season, and enjoying it to the fullest, is what makes the rest of the calendar year bearable.

Fighting: On November 17, I watched four different mule deer bucks on a wheat field, two fights separate from each other, occur at midday. Both pairs were young bucks, but they were tangled up and pushing and shoving for a few minutes. I tried rattling and grunting several times on my whitetail hunt at Plaska Lodge, but never had any bucks respond.

Rub Making: The 9-point I killed this week had lots of fresh, lime green bark tangled in the gnarls on his antler bases. He had likely shredded a mesquite tree just shortly before our encounter.

Scrape Making: Still no reports of scrapes from any of my friends. I’ve walked likely places, field edges and creek bottom habitat, but have yet to see one this season; odd.

Chasing: Lots of chasing by young bucks being reported and a few reports of bigger bucks doing the chasing. Kelley Sims, hunting on November 15, had a big buck chase a doe all around his stand at first light in the northern half of the region. Eventually, the big-framed 8-point stopped at 80 yards for a clear rifle shot. The big buck had 9 ½-inch brow tines and several kickers on his back tines, scoring 145-inches.

Daytime Movement: More reports of bucks that were once vampires now showing themselves in daylight. Kelley’s buck is a perfect example. That buck was on trail camera, always nighttime pictures, in October. When the rut kicked in, that buck was suddenly visible in daylight.

Estrous Sign: Two examples of evidence the rut is here in the northern half of the region. On November 16, I watched a 7-point corner a doe in a shelter belt. The doe was panting like a dog, mouth agape. The buck stood guard ten yards from her staring at her. If she even twitched, he mimicked her move. When she finally started down the fence at a trot, the buck was on her heels at a gallop. A few days before that, on a different property and right at sunset, I watched through a spotting scope as a 10-point chased a doe. The doe would run 80 yards, then stop and look behind her. Then she would run a little further, stop and look back. The buck was trailing with his nose to the ground and the doe was playing hard to get.

X Factor: Texas’ general mule deer season opens in most Panhandle counties on November 21 and in the Trans-Pecos region on November 27. Check with the TP&W Outdoor Annual for season dates by county.