It seems like I’ve been running behind all year. Taxes were late, I could barely find my turkey calls the... 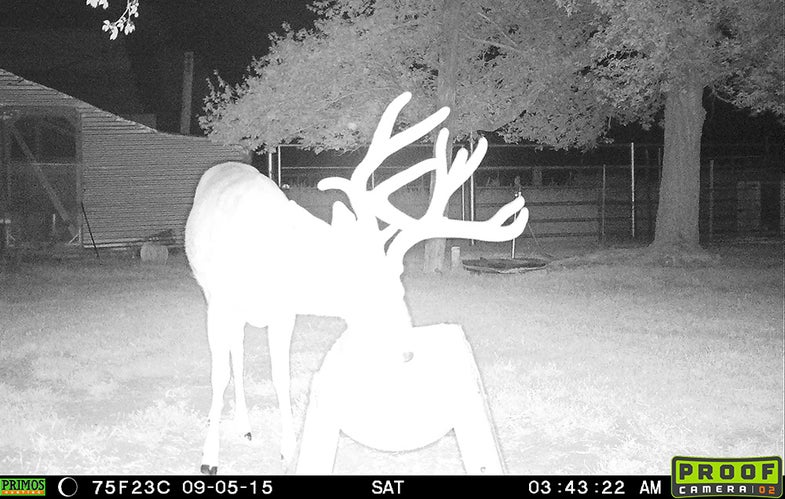 It seems like I’ve been running behind all year. Taxes were late, I could barely find my turkey calls the night before the spring season opened and I still don’t have my deer feeders filled. The above average moisture and promises from Texas biologists of bigger-than-average antlers this fall should have been encouragement enough for me to get things rolling, but I’m still late. September 4 was the first day I put a trail camera out.

The morning of September 5, my 7-year-old daughter Emma went with me to check the camera. It hadn’t even been out 24 hours, so I did not expect much. I handed the camera to young Emma. Almost immediately, Emma said, “Whoah, that’s a big guy!” When Emma showed me the camera, my jaw dropped. It was a wide-racked, velvet-covered mule deer buck with at least two extra points on top of his 10-point frame, a 12-pointer. I got his picture again a few days later, again in the dark.

My part of the Texas Panhandle is crossover country — both whitetails and mule deer inhabit similar terrain. Although mostly the whitetails are on the creeks and in mesquite thickets and the mulies are in the open terrain and rough canyon-country, the deer go where they want and know no boundaries. I caught this buck’s picture near a CRP field where an old barn sits in a stand of trees. A feed trough filled with corn helps me get photos and inventory the bucks in that area. Almost all the visitors to that spot come in the dark, but at least it lets me know they are in the area.

I think I know which buck this is. Last year he was a wide-racked 10-point with average mass. I would guess he was 4 ½-years-old last year. He was fairly visible late in the fall about one mile from where I got his picture this year. I shot a bigger, older mulie buck last year with hopes that this exact buck would survive the gun season and blossom in 2015. He did just that. So this year he has added mass to his beams and a flyer off his right-side main beam and an extra point in the back fork on the left side. All of that extra growth just from Mother Nature’s groceries, no feed or supplement of any kind from me to this point. I’m eager to see what else is out there, but this buck is certainly has my attention.