If you follow this Rut Reporters, you know it’s hard for me to stay focused on just deer at the... 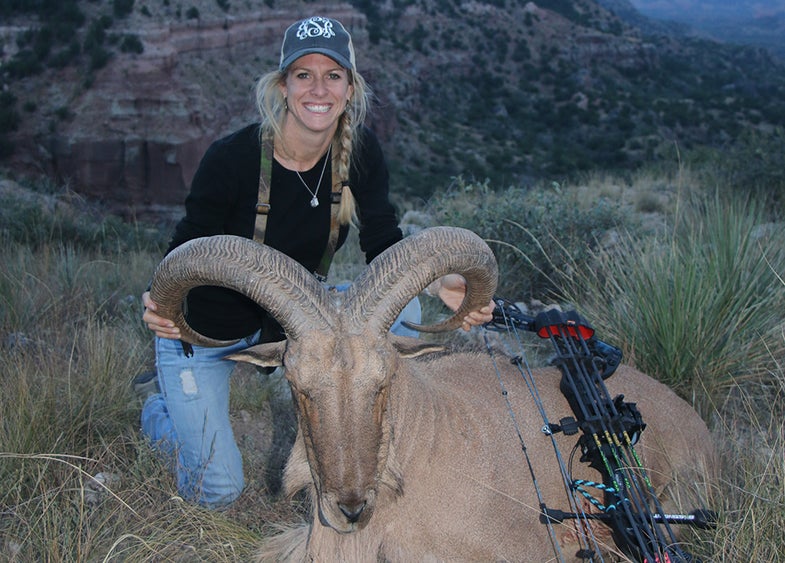 If you follow this Rut Reporters, you know it’s hard for me to stay focused on just deer at the moment. In a place like Texas, I think that’s understandable. Hogs, javelinas, turkeys, exotics, quail, doves, the list goes on. I love my whitetails and mule deer, but there’s more to Texas than just deer.

Aoudad
Last week, I guided veteran bowhunters Robert and Jenny Sanders. October means aoudad sheep are in the rut. At two different blinds I had good rams visiting daily with a herd of ewes.

It was the first evening when, like the trail camera told us, at 6:15 a herd came at a trot from a nearby mesa. Approximately 15 sheep, all ewes and lambs, mobbed the free corn and alfalfa hay. They fed at 20 yards for some 30 minutes. No signs of a big ram.

Coming from the west, maybe 100 yards away, was a big ram following a ewe. It was indeed the giant old ram I’d nicknamed “Red,” due to his dark color. Red charged into the mob like an anxious bird dog busting a covey of quail. Red curled his lip, sniffing each female. I told Jenny to stay calm, he would give her the shot angle we needed. For six minutes, he patrolled his harem blocked by bodies, all the while at less than 20 yards.

Finally, he paused at 18 yards. The other sheep were clear. Jenny went to full draw and hit the big-bodied ram perfectly.

Jenny’s ram had horn bases measuring 13-inches. Horns were 32 ¼ x 31 ½-inches long. His outside spread was 26-inches and his live weight was 260 pounds. Age rings indicate he was at least 10 years old. What a spectacular animal taken in a free-range, no fences environment. Robert hunted for two more days, passing opportunities at smaller rams, but never released an arrow. The big ram that had been so faithful to appear on camera at the blind Robert was hunting, vanished. Much like a whitetail buck in the rut that can disappear, I suspect that old ram found a hot ewe and who knows where they ended up.

Pronghorn
While the rest of the state was getting ready for whitetails, my binos were scanning sage and tall grass for pronghorns in the Panhandle. Soggy, overcast skies greeted me on opening morning, October 3. From what I’d seen scouting the previous afternoon, does and bucks showed no interest in each other, the rut likely over. My focus was tested again as covey after covey of both bobwhites and scaled quail flushed from the truck off the main ranch roads. A bumper crop of the wild birds is waiting for opening day later this month.

It was soggy, wet and cold when my host, rancher RA Brown, spotted a herd down the hill. A good buck was posing with four does. After sloshing through the mud all morning, he was tempting, but we kept looking. It was midday. The herd busted and ran around the side of the hill into chollas and tall mesquites. A half hour later, we bumped the same herd again, but this time a new buck had joined them. The three-legged shooting sticks came out and my tack-driving .257 Weatherby rifle was rested atop with the scope turned to 10X. The rangefinder said 330 yards.

At the recoil I lost the sight picture, but the sound of the 120-grain bullet connecting on flesh and bone was unmistakable. The buck reared up and flopped over in a patch of yuccas. The bullet had broken both front shoulders. His bases were about 6 inches and his longest horn just shy of 14-inches. That night I soaked fresh antelope backstraps in Italian dressing, wrapped them in bacon with fresh jalepenos, and cooked them on the grill. Corn on the cob, beef steaks, potatoes, and good company made the meal memorable.

Texas has much to offer a hunter. I love all of it.