Bucks on the Move in Texas, This Panhandle 8-Pointer Proves It

October 27 was too hot to kill a big buck, with temperatures in the high 70s. It was the peak... 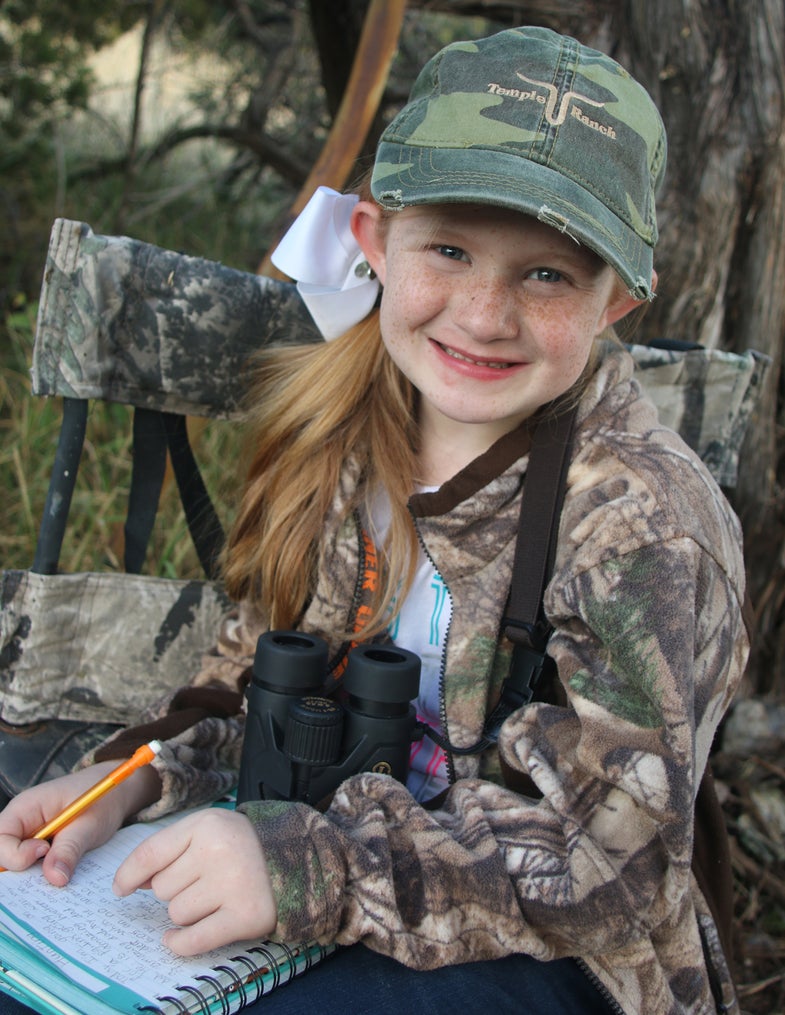 October 27 was too hot to kill a big buck, with temperatures in the high 70s. It was the peak of the full moon, and my 8-year-old daughter, Emma, and I had gotten to the blind too late, finally settling in at 5:45 PM. The wind direction was iffy, and I had forgotten my headnet. Also, Emma had ridden on my back as we hiked through the tall grass to the blind. That’s right, in addition to my 20-pound Catquiver backpack, I was hauling a 65-pound kid on my back. She wouldn’t walk through the chest-high grass and cactus, and I don’t blame her. Killing a buck on an after-school Tuesday afternoon hunt with Dad seemed like mission impossible—but sometimes, despite the odds, things just come together.

Turkeys were there first—sixteen hens and jakes charged in from the creek at 6:30 PM. Emma giggled at their funny sounds and even whistled at them. They were only 20 yards away, and Emma wrote notes in her journal on her lap, recording what we saw. (Maybe another writer in the family?) Our natural-brush blind was a good hideout, but not a dark cave like a pop-up blind.

For the next half hour, Emma asked if she could climb up in the tripod stand, what time a big buck would be there, if I had any snacks, and what we were having for supper. My patience was tested, but I know she trying to be good. She was as still and quiet as humanly possible for an 8-year-old—which is not at all.

It was almost 7 when I saw antlers bobbing through the mesquites 60 yards out, headed our way. It was a mature 8-pointer I’d seen on my trail camera and from a distance through a spotting scope. Also, a doe was slightly behind us on a hill 50 yards away, giving us the stink eye. Why she didn’t explode like a grenade I’ll never know. Emma was bobbing her head back and forth between them, trying to watch both deer through her Leupold 8×32 binoculars.

Finally, the buck posed broadside at 20 yards. Emma shuffled a bit to my right to give me clearance to draw my bow. I sucked the 58-pound Bear Arena 34 bow to full power. Five seconds later, my 410 grain Victory VAP carbon shaft, led by a 4-blade Slick Trick broadhead, hit him behind the left shoulder and passed through the lungs. He trotted 30 yards, stopped in an opening, then we heard him fall, kicking in the brush. Then all was silent.

The buck’s rack was bigger than I’d expected, which is always a nice surprise. His heavy beams and 5-inch brow tines should push his gross score to 135 or 140 inches. Tooth wear looks like he was 6-½ years old. His G-2s are slightly bladed, and the G-3 on his right side has a unique “acorn” on top of it. The rack will look good in my office, but I’m equally excited about fresh back straps and delicious venison sausage to last all year.

Emma did a great job taking pictures in the dark, which is no easy task for even a camera pro; you can even the rising full moon in the background. Sharing the hunt with my favorite girl was such a great experience. Despite a late setup, sketchy wind direction, and hot weather, I arrowed a fine Texas Panhandle buck. Sometimes I think hunts like this are just meant to come together, despite the odds.