This behemoth non-typical from Wyoming was photographed last week 12 yards from a bowhunting stand, according to Wind River Whitetails... 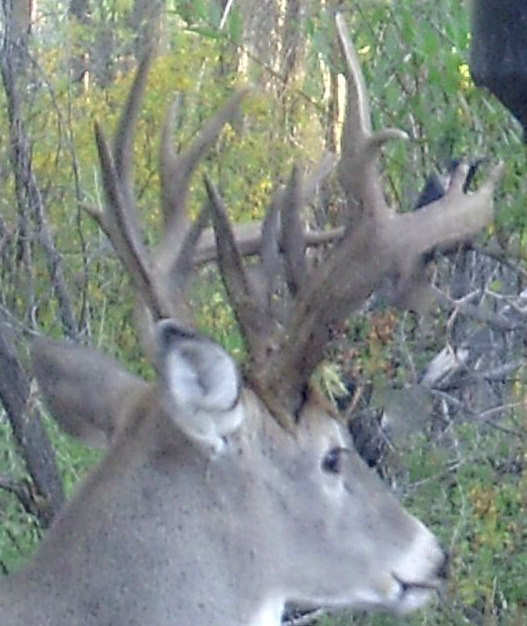 This behemoth non-typical from Wyoming was photographed last week 12 yards from a bowhunting stand, according to Wind River Whitetails Mike Rinehart. Deer here near Riverton, Wyoming, and elsewhere across the West, have shifted firmly into pre-rut mode and are confounding some hunters who have had deer patterned for months. Those reliable and semi-reliable bucks are now gone from most cameras, bound for new bedding areas closer to the rutting action to come in a month or so.

“I’ve pulled ALL of my cameras and have strung out ‘traplines’ to relocate bucks,” one source said. “It’s working, and I’m finding my bucks bedding much lower in elevation and closer to large concentrations of does.”

No serious chasing behavior has been observed yet, but bucks are sparring and continuing to visit scapes. The rut is still a ways off, but deer behavior on the ground reveals that everything is unfolding as it should. Several sources report bucks visiting mock scrapes.

“We’ve had a lot of big bucks show up on our game cameras over the last two weeks,” says Rinehart of conditions on his big Wyoming ranch. “Other than that, it’s been pretty boring around here so far in terms of whitetail behavior, with deer still feeding early and late. We’ve been hit with a lot of hot days, but that appears to be changing with daytime highs now into the 50s.”

Unlike much of the Cowboy State’s Bighorn Basin, Black Hills, and eastern river valleys, the Wind River was spared from EHD outbreaks in 2012 and 2013 that may have been larger than previously expected. There are still very huntable numbers of deer in most places, and populations are still perhaps too high where EHD did not strike.

More hunters are beginning to think about whitetails in the West now that general openers are almost upon us and as fall weather settles in. It’ll still be a while until interest peaks coinciding with the rut, but some nice deer are already falling, mostly to archers and muzzleloaders. That will soon change though as many thousands around the region take the field in October. That influx of humans into the deer woods will likely slow deer movement – especially in the case of bucks – until cold weather and hormones drive deer to feed during daylight and to wander the landscape in search of love.