Overall activity status: My friend Shawn Hoover has been chasing the above big buck in northwest Oklahoma. It’s a buck... 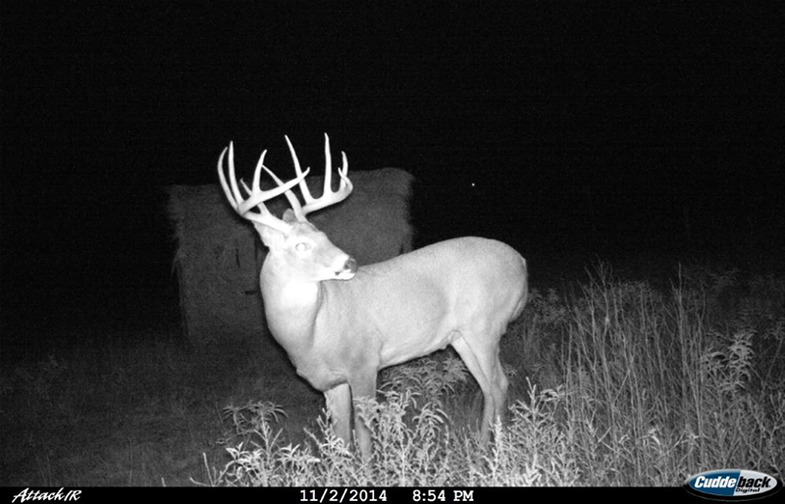 Overall activity status: My friend Shawn Hoover has been chasing the above big buck in northwest Oklahoma. It’s a buck with which he has lots of history. Shawn calls the buck Splitter because it’s had a split brow tine on its rack for the past couple of years. The tines are long, and the brow tines are huge. Shawn is guessing he is close to 160 inches. His experience with the buck this season seems to be a common one, according to hunters I’ve talked to.

Shawn’s trail cameras showed the velvet-racked buck moving in daylight in August and September, but once the season opened, the buck went nocturnal. A couple of times Splitter has posed for the camera with a few minutes of shooting light left in the evening, but of course Shawn was not in the blind on those random days. Shawn is hoping, and I’m betting, that colder weather this month and the urges of the rut bring him out in daylight.

Fighting: I’ve gotten a few more trail camera pictures of bucks sparring, but so far no reports of any serious fights. I’ve tried rattling a couple of times recently, but had no success. I have not seen any bucks with broken racks yet.

Rub Making: I hiked into a creek bottom just today and saw only one fresh rub on a small mesquite. Other rubs were old.

Scrapes: None of my contacts have reported fresh scrapes. Again, recent rains have made vegetation so dense and thick that finding such sign is harder this year than usual.

Chasing: I’ve heard about two bucks chasing a doe in the ditch next to a busy highway, around midnight, in the northern Texas Panhandle. That’s the only chasing report I’ve gotten.

Daytime Movement: Temperatures are finally cooling, with low temps in the 40s in the northern half of the region. That cooler weather should have bucks up and moving. I saw more bucks close to home on trail cameras the last week in daylight than I’ve seen in a month. One of them is a new face, a fine 10-point, which I plan to devote some time to when the wind is right this week.

X Factor: The full moon this month is on November 6. I always say hunt whenever time and work allow, but if you have to pick only a few days to get away and hunt, don’t do it within a couple of days either way of the full moon, just because bucks are more likely to be moving under darkness.