Daylight Activity Picking Up in the Northwest

Overall Activity Status: Although rut activity has been spotty out West, in general, in northeast Washington, daylight movement of mature... 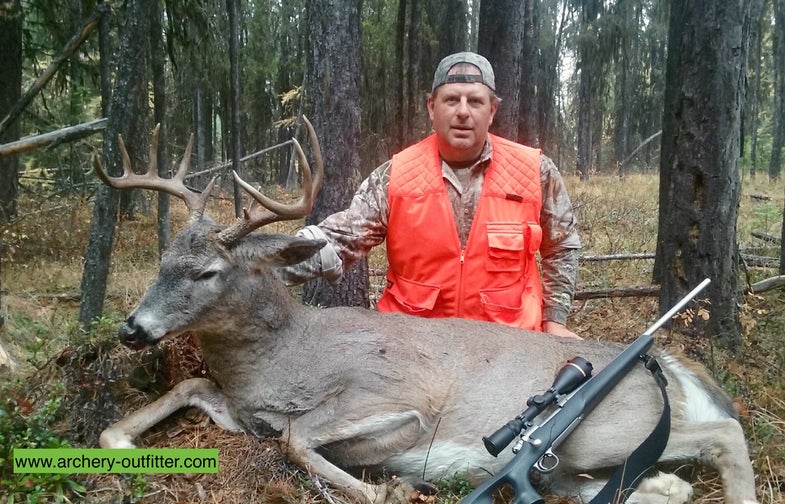 Overall Activity Status: Although rut activity has been spotty out West, in general, in northeast Washington, daylight movement of mature bucks has increased going into the last week of October, as well as overall rut activity. Josh Judd, owner of Archery Outfitter out of Clayton, Washington, reported that several mature bucks have been caught on trail cameras in the early morning and late-evening hours. In fact, Scott Hageman, a hunter Josh had in camp during the rifle season opener last week, killed this impressively wide 5×5 at about 4:30 p.m. on the second day of his hunt. Josh had been seeing this deer all summer and was glad to finally wrap a tag around him. The buck’s teeth were worn down to nubs, and Josh suspects that the buck to be six-plus years old. This public-land deer scored in the mid-130s and carried split eye-guards.

Josh attributes the increased activity to favorable weather conditions, as well as the new moon. The much-needed precipitation throughout the region the past few weeks coupled, with frosty temperatures in the low to mid-30s most nights, as well as some in the 20s, have brought the big boys to their feet.

Also, Barin Fuson, owner of Fuson Taxidermy (509-276-1040) in Nine Mile Falls, Washington, has reported an increased number of both whitetail and mule deer bucks showing up at his shop daily. In fact, on the evening of October 26th, he was fortunate enough to anchor a handsome buck himself. The mature buck sported a double main beam on his left side and carried an impressive 9×4 rack that will reach into the 150-inch range. The buck was easing through the woods heading to a feeding area when Barin shot him.

Fighting: Nothing to report yet.

Rub Making: Josh reported seeing increased rub activity through his region between bedding and feeding areas and expects that to intensify the next few weeks.

Scraping: Every few days Josh is seeing more scrapes opening up between bedding and feeding areas. According to Josh, bucks seem to be more concentrated this year because of the wildfire activity in his area this summer, so he expects this, as well as rut activity, in general, to intensify as bucks establish dominance.

Chasing: Some young bucks are beginning to get a little curious and push some does around, reported Josh, but the older bucks have really not displayed chasing activity yet.

Estrous Signs: Nothing to report yet.

X-Factor: With November just a few days away and weather conditions remaining favorable, with cooler temperatures at night and some expected precipitation, Josh expects buck activity to steadily increase. Although he doesn’t expect the rut to peak until the third week of November, now is the time to start finding where the does are bedding and to plan your hunts accordingly. Although the big boys are not yet showing interest in the does, they will more and more each passing day—so knowing where the major doe bedding areas are, as well as where they are feeding, will pay antlered dividends.