Noah McKinnon with his whitetail. For folks who live out West and for those who travel there seeking big game,... 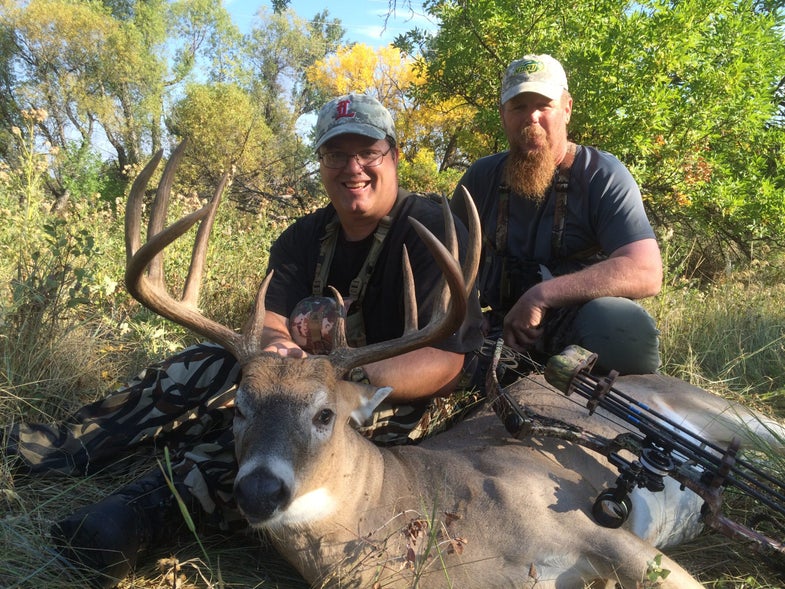 Noah McKinnon with his whitetail.

For folks who live out West and for those who travel there seeking big game, whitetails often take a backseat to elk, mule deer, and pronghorn. I guess you really can’t blame them, especially when you first hear the bugles of a rutting bull elk echoing through a deep drainage, or see an iconic mule deer buck sporting nearly 200 inches of antler “stotting” beneath the jagged peaks of the Rockies, or witness the distinctive African-like characteristics of the pronghorn as he races across the purple sage.

When Noah McKinnon, of Tallahassee, Florida, arrived in Montana for a fourth season in as many years, he too had visions of heavy-racked mule deer bucks and screaming bull elk, but that all changed when he happened to cross paths with a particular whitetail that would make any Western hunter drool. After a quick change of plans and focus, Noah capitalized on the buck’s summer habits and leery nature; here’s how he got it done:

When Noah hunts with Mark DeCock, owner of MAD Outfitting, of Forsyth, Montana, they focus on mule deer. Although Mark has some whitetails in his area, when it comes to guiding hunters, he primarily focuses his attention on mule deer, Noah explained, and for several days they spent most of their time glassing hillsides, valleys, and hay fields looking for the best mule deer buck they could find in a stackable position. Though they got close, it wasn’t archery close, but they knew it was only a matter of time.

_While glassing one afternoon, they watched several nice whitetail bucks working down a creek bottom toward a hayfield—and the last one caused both of them to look twice. Although mule deer was Noah’s primary goal, when he saw the size of the last buck in the group, the men quickly began making plans to intercept the deer the following afternoon. As luck would have it, Mark already had a treestand positioned in the creek bottom where the whitetails were traveling, and with the bucks on a bed-to-feed pattern, they hoped an opportunity would present itself. _

_The following evening, Noah had three nice whitetail bucks within bow range, but the fourth—the largest of the group—proved to be a little smarter than the others. As he inched nearer, giving him a better look at his impressive rack, the buck looked directly at the treestand from the far side of the creek. As quickly and quietly as the buck appeared, he disappeared in the opposite direction, and Noah knew right then that he would have to adopt a new strategy. Wanting to take advantage of the buck’s leery nature, the following day the men concealed a ground blind on the opposite side of the creek in a thick patch of Russian olives, hoping that the buck would make a fatal mistake in the coming days and give him a quality shot. _

Unable to shake the whitetail from his mind, for the next few days Noah concentrated on mule deer in the mornings and whitetails in the evenings, but both seemed to elude them. However, on the third evening that all changed. As luck would have it, the whitetail buck showed, and just like the previous time, he looked up at the treestand opposite of the blind where Noah was now hiding. When buck did, Noah let the arrow fly. With a quartering away shot, Noah’s arrow drove deep into the deer’s chest, and the following morning he recovered he prize. At just over 167 inches, the buck is the largest whitetail Noah has ever killed and more than he could have hoped for.