End of Supermoon Gets Deer Moving in Daylight

Most of Montana was spared from the effects of widespread EHD outbreaks during the summer of 2013, but certainly deer... 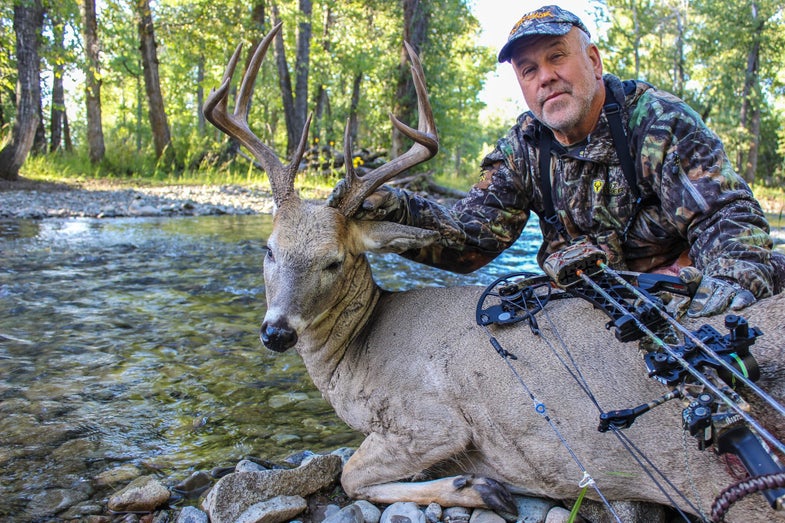 Most of Montana was spared from the effects of widespread EHD outbreaks during the summer of 2013, but certainly deer numbers are way down in some areas, especially some drainages in north central and south central Montana. Thankfully, for Montana’s largest whitetail guiding operation and most other outfitters operating in Big Sky Country, Montana Whitetails’ big slice of heaven came through unscathed. Owner Keith Miller has had hunters in the field for the last several days, including the hunter above, who took this nice four-point.

Last week’s so-called “Supermoon” had a profound impact on big-game hunting around the West. Animals were extra-active outside of shooting hours and lethargic when hunters were in the field. The action is looking up, though, according to reports from guides and archery clients.

“We’ve been pretty busy adjusting to changing conditions here in the Shields River Valley north of Livingston,” said Miller. “The deer are finally starting to move more now that the moon phase is waning and the temps are staying cool.

“We had one hunter score on a whitetail buck in the last couple days and 2 guys get antelope bucks. One hunter last Friday saw 12 bucks with 3 shooters. One hunter this morning saw 14 bucks and missed the biggest buck he ever shot at, a big 10-point at 15 yards. A hunter south of him this morning saw about 60 deer, 18 to 20 bucks, with several big bucks. He had one right at daybreak at 5 yards with a big frame, but it was too early to shoot.”

“Guys were seeing deer pretty much all morning long, even right up until noon. Another hunter had a big 10-point walk close to him but didn’t get a shot. Another guy close to him saw a bunch of whitetails and several bull elk and about 70 cow elk,” Miller noted.

The Shields River Valley produces a lot of mature bucks, so Miller knows the best is a long ways off. Nonetheless, he seems enthused about this trend away from nighttime activity.

“The deer are definitely moving better these last few days, way better than the full moon phase last week,” Miller said. “Food sources are changing and the deer are keying in on alfalfa fields that are regrowing after recent cuttings. Deer sightings are increasing and bigger bucks are being seen, but not the biggest ones we know are in the area.”