Deer season will be over soon, so we should relish every moment spent in the trees, dirt, and thorns. It’s... 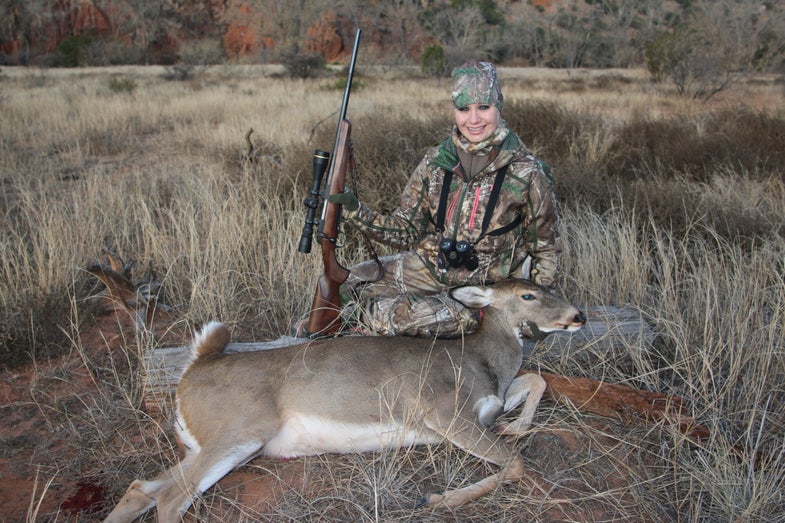 Deer season will be over soon, so we should relish every moment spent in the trees, dirt, and thorns. It’s a refreshing change from the concrete, deadlines, and technology that dull our senses the rest of the year. And it helps us enjoy the simple things, as one new hunter found out recently.

It was a cool, crisp December day–so still that any movement or footstep disrupted the silence. The cottonwood trees by the creek were mostly bare except for a few brown leaves that fluttered gently to the ground. The city felt far away.

The doe appeared to the north, maybe 100 yards away. She appeared, quiet as smoke, walking stiff-legged and sharp-eyed, alert and wary. She stood for several minutes, as motionless as stone. Lisa Armbruster sat ready with a scoped .243 rifle waiting over tripod shooting sticks.

The sneaky whitetail got nervous, waved her flag once, and trotted out into a clearing maybe 80 yards away, but then stopped broadside. Lisa clicked the safety off her Browning rifle and sent an 85-grain Nosler Partition bullet into the sleek deer’s side. By the time she got there, the doe lay still. It was Lisa’s first-ever deer–a memorable, life-changing event for anyone. The fine Texas whitetail will be cut to steaks and made into tasty sausage. Lisa was proud of her one shot kill and equally proud of the meat she will put in her freezer. The doe’s tanned hide will hang over a chair in her home to remind her of that fine day.

There is no such thing as shooting “just” a doe. Any deer taken in fair chase is a trophy, whether it has ten points or none. Many of us are captivated by the pursuit of big-antlered deer, but we should never get so caught up in it that we lose sight of the bigger picture. Take pride in filling your freezer this month, whether it’s with a doe, a spike, or a Booner.

Congratulations, Lisa, on your first deer!