First Rub, and Some Light Sparring

Overall activity status: I’m seeing the same handful of bucks on my trail cameras, not much has changed in the... 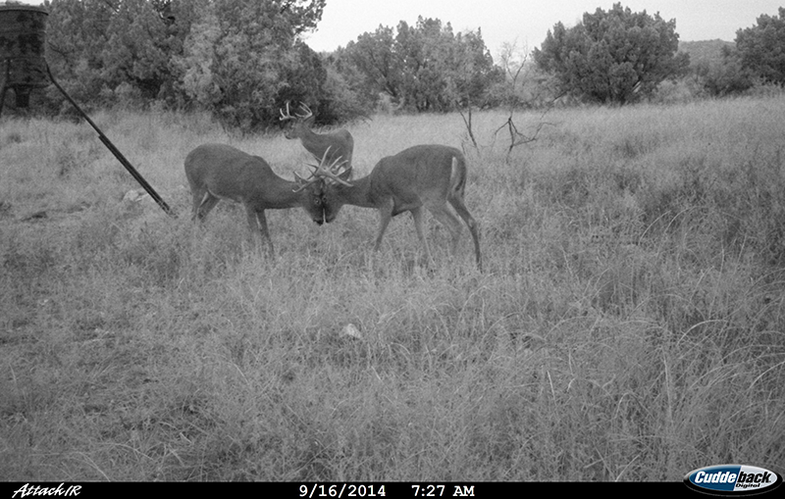 Overall activity status: I’m seeing the same handful of bucks on my trail cameras, not much has changed in the past couple weeks. Friends report the same thing: familiar faces every day. I’m getting more daylight pictures on my cameras now, first and last half hour, versus a couple of weeks ago when most were taken in the dark.

Fighting: I got a few trail camera pictures last week of young bucks meshing antlers and pushing each other around, as seen here. In September, this is mostly playful stuff, not life-or-death fights for girls. The real knockdown stuff will happen later.

Rub Making: I saw my first rub of the season on September 21–a small tree rubbed at waist level along the banks of a creek. I looked for other rubs in the area, but found just that one. All the whitetails on my trail cameras are now out of velvet. By contrast, all of the mule deer are still in full velvet!

Chasing: I’ve watched a few deer chasing each other around food sources, like in tight quarters around corn feeders. That’s just a dominance display, mostly according to age class, on who gets to stand where to eat the free corn. This chasing doesn’t have anything to do with breeding right now, like a buck chasing a hot doe. That will come later.

Daytime Movement: We’ve had some true fall-like weather at the top of Texas in the last week, plus some good rains. Morning low temperatures in the 50s have deer a little more visible in daylight right now.

X Factor: Typically, the start of Texas’ bow season means hot weather, bugs, and minimal big buck activity in daylight due to hot temperatures. Parts of the region, mostly the southern half, will be facing hot weather for the opener this coming Saturday, according to weather forecasts. The northern half could see below normal temperatures. That should mean better odds of seeing those older bucks in daylight.