Long before opening day, Texans knew the 2015 season would be special. Abundant rain came at just the right times... 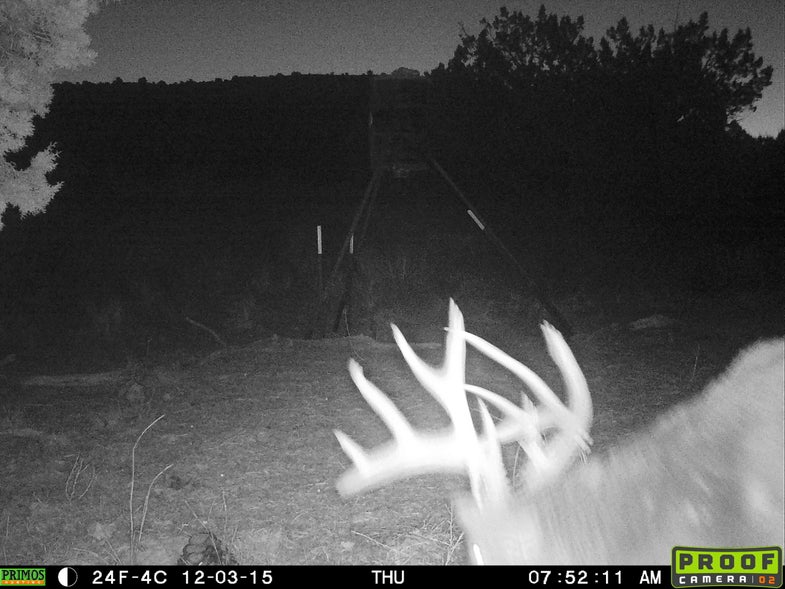 Long before opening day, Texans knew the 2015 season would be special. Abundant rain came at just the right times across Texas’ best deer counties. That rain translated into lots of forage and cover for the deer, which meant bucks were healthy and their racks were at their full potential. The year also saw a bumper fawn crop and a huge turnaround for wild quail populations. So far, the season has lived up to the expectations for me. I’ve had a great year. Just when I thought it couldn’t get any better, it did.

Back in mid-November, a friend filmed a huge buck not far from a place I hunt. To be exact, the buck was 1.3 miles from the land I can hunt. A mile or two is not far for a whitetail buck to travel, especially in big country with low deer numbers, like the area where that big buck was filmed. So I hoped he would show up on my side of the fence, but tried not to get too excited about it either. Those sorts of “what ifs” never seem to work in my favor.

On December 3, about three weeks after my friend filmed the big non-typical, my trail camera caught his picture multiple times in the early morning. For almost one hour he hung around a corn feeder with several smaller bucks. My eyes almost bugged out of my head when I was checking trail cameras on December 4. There was no mistaking that it was the same buck from the video. He has a huge typical ten point frame, but both his G-2’s are forked like a mule deer. He also has some smaller kickers around his bases and at least one short drop tine on his left beam. My friend that filmed him said he could see three drop tines, but in the trail camera pictures I can only confirm one. My friend Joe, who knows deer and how to score them, estimated the buck at 180-inches, maybe more.

So every time the wind has been favorable, I’ve been sitting in the ground blind at that feeder. And so far I’ve seen bucks every time I’ve sat there, but not the giant. To complicate things, 12 of the neighbor’s stray cows are wandering down that creek, hanging around my feeder and rubbing against the T-posts that hold my trail cameras. Deer don’t like to visit corn feeders when a dozen cows are there already. In the past, I’ve had wild hogs scare deer off that feeder and even had trespassers wander down the creek right at prime time. So as if killing a monster buck wasn’t hard enough already, the hunt is even more complicated.

But I’m not whining! Just to have the chance to hunt such an old, gnarly buck is incredible. There’s still lots of time left in the season. In fact, that property is on the MLDP (managed lands deer permit) program so I can hunt even longer than the regular state season. So if anyone needs to find me for the next month or so, I’ll be sitting in a natural brush blind somewhere in the Texas Panhandle. Waiting on my date with the biggest buck of my life. Wish me luck.