Good Hunting Should Continue in the Cold

I have a friend holding out for a trophy-class buck in Idaho’s Latah County who has seen lots of shooter... 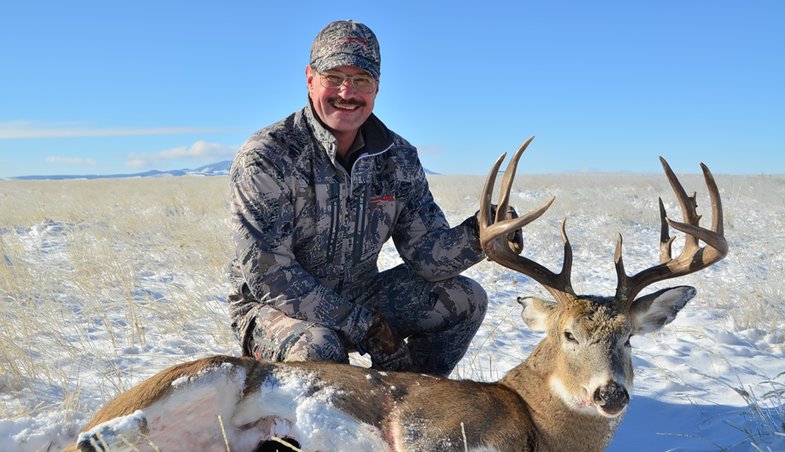 I have a friend holding out for a trophy-class buck in Idaho’s Latah County who has seen lots of shooter deer and who watched a close friend miss a shot on a giant two days ago. Now, Rich Lindsay is after that buck and confirmed what I reported in my last post from many sources: large bucks are moving throughout the day, especially as cold conditions favor deer movement.

The sudden big warmup we’ve experienced out West resulted in record high temperatures in many locations on Thanksgiving, but bucks continued to move and fall to hunters in the Inland Northwest and the Northern Rockies. The bad news for weekend travelers and good news for whitetail hunters is that a dramatic cool down will halve temperatures and bring snow, getting bucks moving even more.

The photo above (provided courtesy of Helena’s Monarch Taxidermy) is of a Montana bruiser taken by Randy Yaeger. Like a number of surprised hunters I’ve spoken to over the last week just after their largest bucks ever, Yaeger was shocked to take such a huge animal, but had to deal with extreme cold to do so.

“I spent three days last week hunting my uncles’ ranch in north central Montana,” said Yaeger. “I have hunted there for over 40 years and have never seen a whitetail remotely close to the size of this one…the weather was pretty harsh with the actual temperature around -10F, with a 20 mph wind out of the north.

“My hunting partner, Brandon Moore, spotted this buck on the skyline about 160 yards out. I wouldn’t take a skyline shot and thought for certain the deer would take off before I could get into a position where there would be no skyline hazard. Fortunately, the deer remained in place as I moved to get into a shooting position. As I was doing so, a doe we had not seen stood up and moved forward about 20 yards. The buck followed for around 8 yards, actually improving the skyline circumstance, providing a solid backdrop.

“The buck dropped where he stood with a single shot from a .25-06 Sako Fiberclass, using a 100 grain Nosler solid base SP. The taxidermist rough scored the buck at 162. The buck has five primary points on the right with two additional kickers and five primary points on the left side with three additional kickers. All in all, a great deer and a real blessing.”

Yaeger’s buck is one of several in the 150-170 class I’ve gotten reports on over the last couple days, and in my next report I’ll have an update on rutting conditions along with details about two huge eastern Washington bucks that just fell. With the weather set to change so dramatically, conditions should continue to be excellent.