High Hopes for Big Bucks Across Colorado and Montana

A Montana whitetail killed by Michael Mattson last fall. Photograph courtesy of Keith Miller/Montana Whitetails. Montana and Colorado have the... 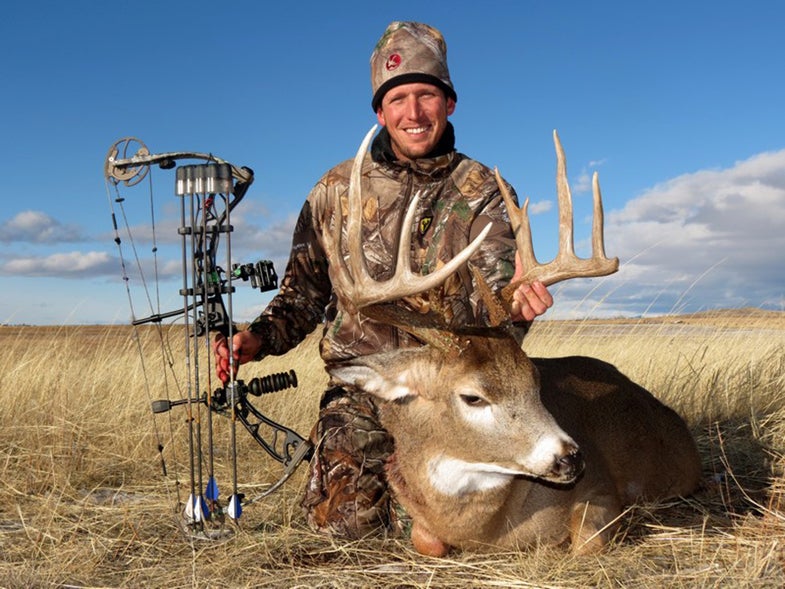 Montana and Colorado have the latest season openers in the western region, and—although prolonged drought and disease were the headlines in recent years across these scenic destinations—successive mild winters, coupled with record-setting spring moisture, gave their deer populations the jumpstart they needed to recover.

Both the north central and eastern regions of Montana were among the hardest hit with EHD (epizootic hemorrhagic disease) a couple of years ago across the West. Compounded with back-to-back harsh winters in 2009/10 and 2010/11, whitetail numbers in these regions took a significant hit. According to John Ensign, wildlife manager for region seven, “Whitetail populations are variable throughout the region. Where the EHD was low or even nonexistent, higher whitetail densities exist, but where the disease was more prevalent, hunters did see an impact.”

But Mother Nature always balances the scales, though. Mild winters the past couple years, as well as no reported cases of EHD, have brought whitetail numbers close to their long-term averages in many areas. In fact, whitetails averaged 84 fawns to every 100 does during recent spring surveys, with buck-to-doe ratios hovering around 40/100, which shows a positive trend.

Outfitter Keith Miller, owner of Montana Whitetails says, “I talked with the wildlife department, as well as the game warden that covers our area in region three, and there were no reported cases of EHD in our valley. Furthermore, the deer herd looks stronger this year than last year, and the antler growth looks really good overall, as well.”

To the northeast, the region six whitetail herd is trending up, as well, as wildlife manager Mark Sullivan notes. Although the population is estimated to be under the 23,668, 10-year average, it’s currently hovering around 21,000.

The mountain whitetails in Montana’s northwest (region one) are also doing well. Fawn recruitment the past several years has been good, and hunters are beginning to see more older-class whitetails. These are good signs for hunters not only wanting to put meat in the freezer but also hang an oversized rack on the wall.

Regardless of where you have the opportunity to hunt whitetails in Montana this season, success will ultimately be determined by what you put into it. Scouting is always a key element. The more familiar you are with the ground you plan to hunt and how whitetails use it, the better the chances you’ll punch your tag. Although private ground generally yields better results, public ground can also be good. Montana’s Block Management system has been good to public-land hunters, with more than 7.3 million acres affected by the program.

Though Colorado is no doubt known more for epic elk numbers, stretching some 300,000 strong as the season unfolds this year, as well as giant mule deer opportunities that are second to none, the state’s whitetail numbers aren’t too shabby, either. Located mainly along the South Platte and Arkansas Rivers’ drainage systems along Colorado’s eastern plains, whitetail populations are solid and even expanding westward. Although the 2012 EHD outbreak really wasn’t a factor as in many locations, the six-year drought did have an impact, especially in the southeast region of the state. Regardless, whitetail numbers are generally stable to increasing across these riparian regions, and hunters with a limited tag will have good opportunities at mature bucks if they put in their time, according to terrestrial biologist Marty Stratman.

These regions are dominated by private ground, however, and although access can be gained with a polite knock on the door, access is getting harder to find, especially for archery hunters. Both of these river drainages offer numerous large and small tracts of public ground, though, and, because deer tags are limited in these regions, often taking years to draw, it’s pretty easy to leave the crowds behind with a little leg work.

In an effort to keep Colorado’s whitetail herd from establishing a deeper foothold west of Interstate 25, pushing mule deer out, and creating a mule deer/whitetail deer hybrid, 19 game-management units along the southern Front Range offer unlimited whitetail-only tags. Although this area is heavily dominated by private ground, some public dirt exists if you search it out. And with the season stretching the whole month of December, it’s an excellent opportunity to get additional table fare.