In the Texas Panhandle, late November’s combination of cold weather and rut-dizzy whitetails often makes for good hunting. That’s what... 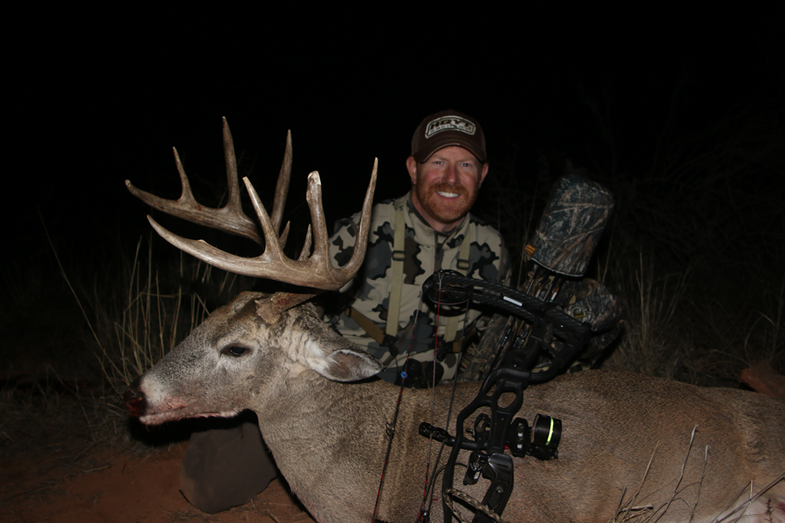 In the Texas Panhandle, late November’s combination of cold weather and rut-dizzy whitetails often makes for good hunting. That’s what I was thinking last Friday as I made my way towards a ground blind near the creek. It was 4:25 p.m. when I nocked an arrow and knelt down in the shadows under the twisted juniper tree. My target buck, a symmetrical, dark-horned 10-point, had been on the trail camera the previous afternoon at 4:45 p.m., and again that very day early at 3:15 p.m. It was only a single photo, but enough to let me know that he was somewhere close.

It was a rare dead-calm day for the windy Panhandle plains. The first visitors were four chubby Rio Grande gobblers, which made me smile because I had not seen a turkey on the creek all fall. But the next hour it was like a graveyard. A beautiful fall day, 60 degrees and clear skies, no wind…where were the deer?

It was after sunset when I spied movement near the creek 150 yards away. A small 8-point, which I recognized as the one that had been on the camera with the 10-point earlier that day, was walking like a cat burglar—taking a step, then stopping and surveying his surroundings. He vanished behind cedars.

It was 5:55 when I heard movement in the brush to my left. Walking through the gap in the old barbed-wire fence was a single deer. It was only 30 yards away, but shielded from view by trees. When the deer cleared the brush at 20 steps, I saw antlers. I slowly raised my 10X Leupolds to my eyes, took a look, and saw it as my target buck.

Daylight was fading, though, and I needed the buck to clear one last bush and give me the right angle.

It seemed like an eternity, but finally the buck was clear at 20 yards. It was 6:03 p.m., which meant that four minutes of legal shooting light remained. When I drew back my Hoyt Carbon Spyder bow, I fully expected the old buck to catch the movement, but he didn’t. I put my eye to the peep and followed my pin up his front left leg to find the shoulder, steadied, then touched the release trigger. My 400-grain Victory VAP shaft tipped with a 4-blade Slick Trick broadhead hit with an audible thump. The buck spun and went behind trees. A few seconds later I heard brush snapping, then the sound of hooves kicking, the buck down and thrashing, I thought.

I waited ten minutes to let things settle. By headlamp, I found my broken arrow covered in sticky blood, broken just in front of the fletching. Fifty yards from there, the 6½-year-old buck lay dead. My arrow had hit in the crease halfway up on his left side, but he had been quartering to me more than I realized. The broadhead had hit one lung, the liver, and paunch, then exited low and in front of his right hindquarter. Death had been swift. The handsome buck weighed a bit less than 200 pounds. His 10-point rack gross-scored 140 inches, with 3 inches broken off his left side G-3.

Once again, late November lives up to its reputation!