The dramatic warmup over Thanksgiving is long gone out West, and bitter cold is keeping does and bucks on their... 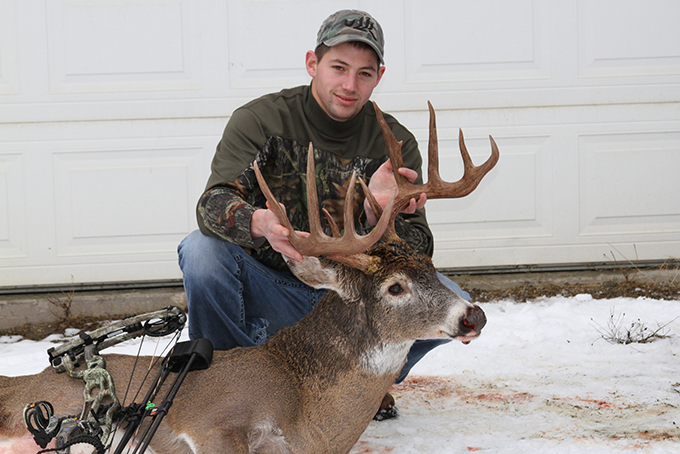 The dramatic warmup over Thanksgiving is long gone out West, and bitter cold is keeping does and bucks on their feet. Conspicuous among those deer are the West’s biggest bucks, and many hunters are in the field after them right now.

I’ve consistently seen more and larger whitetail bucks over the past couple weeks, and especially over the last couple of days. My sources in Washington, northern Idaho, and Montana have seen the same. Montana’s general season is now closed, and archers and muzzleloaders represent the majority of those left in the field in Washington and Idaho. Hunters are still in the field in eastern Colorado.

My home state of Washington has produced more nice whitetails this year than I can ever remember. Successive mild winters and excellent breeding conditions and no major EHD outbreaks have whitetail populations booming in the Evergreen state. Evidence of that is the heavy 5×5 above, which fell to Colville’s Tanner Bircher in northeast Washington.

“I recently started hunting a spot I used to hunt during archery season, where I had great bucks on camera but no daytime opportunities. I was still confident in the area, knowing the chance of a good whitetail was high. I placed a tree stand and camera prior to season, with intentions to hunt the area once pre-rut began.

“During the week I was in my tree stand an hour before daylight. On November 19th, about 15 minutes after getting settled in I saw the buck for the first time. Although it was before shooting light I was still ecstatic that he showed himself near daylight hours. I was now dead set on this great whitetail. Although skeptical that I would ever see him again, I was willing to eat tag soup to wait for this buck of a lifetime.

“For the rest of the week I sat in my stand from daylight until dark, seeing several bucks. With my girlfriend coming home from school Friday night, I decided I would set up a ground blind Saturday morning in the same area. After getting the blind set and brushed in by 930 a.m., I did a short rattling sequence, calling in two does within the first 15 minutes of the sit. Well those two does were the highlight of our day as we were now sitting on the last half hour of daylight without any other action.

“Right when I was about to call it a day I noticed something moving in the brush. After a minute or so I saw it was a doe, and a deer I could not see yet. Once that other deer got closer I attempted to get my video camera ready in case it was a buck that my girlfriend could get a shot at. The action then shifted into high gear when the deer, a buck, put his head down and started pushing the doe. The buck covered a tremendous amount of ground, ending up right in our lap at 20 yards, with the doe blowing out of the area.

“He was the buck I had been after. Knowing I did not have much time before the buck took off after the doe again, and with my girlfriend not quite ready to shoot, I left the video camera on the tripod, drawing my bow at nearly the same time, settled the top pin on his vitals and watched my Lumenok disappear into the pump house of the largest whitetail I have ever had at such a close range.

“Still in shock of what had just happened I repeatedly asked my girlfriend where I had hit the buck, with the answer consistently being ‘perfect.’ We waited a long time before following and found a great blood trail, beginning right where I had shot him, which glowed in the snow. He made it only 60 yards from where he was double-lunged.”