Mature Bucks Getting Ready to Wander, So Stay Patient

Overall Activity: The buck at the center of the accompanying photo is the same big-bodied buck I arrowed on October... 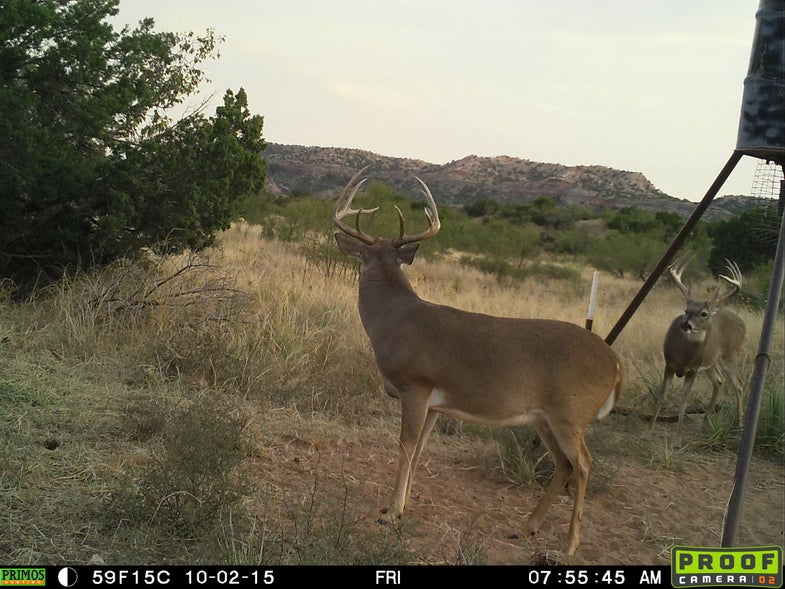 Overall Activity: The buck at the center of the accompanying photo is the same big-bodied buck I arrowed on October 15. Tooth wear looks like he was at least 7 ½-years-old. His 9-point rack carried 130-inches of antler. After I killed him, I looked back through the trail camera pictures and realized just how visible he had been. He was clearly the boss around that feeder, the other smaller bucks always circling the perimeter. Now that he is gone, I’m betting another mature buck will move in to that area. Overall, lots of deer activity in the past week. That should get even better as we get colder weather toward the end of the month.

Fighting: Still just casual sparring reported, no major fights yet. I have yet to see a buck with a broken tine, but usually around end of the month and early November, fighting increases and bucks start to show scars and broken tines from fights.

Rub Making: The buck I killed last week had fresh mesquite bark ground into the gnarly bumps around his antler bases. I’m sure several of the rubs on mesquites around that stand location were from him.

Scrape Making: None reported yet.

Chasing: No reports of any serious buck to doe interactions yet, but that could change any day now.

Daytime Movement: Good movement reported first and last hour of the day now. My trail cameras show more activity, especially bucks, during the colder mornings than during the warmer afternoons. Bucks hang around the feeders until about 8:30 a.m. Afternoon activity is mostly from sunset until dark.

X Factor: Late October and early November, at least in the northern half of the south central region, mean fall shuffle time. It’s the time when bucks start cruising, covering territory looking for receptive does. A buck that was so predictable in a one-square-mile area suddenly starts to wander, often for several miles. Distance of the wandering is often determined by deer density and habitat type. In low deer density areas, a buck will wander further looking for a mate. That wandering can be good and bad for a hunter. The familiar face you saw so often at one blind might disappear for a month or longer in the rut. But at the same time, some new bucks will likely come into your area. I’ve even tracked the same buck, for multiple years, doing this shuffle from his home range and wander 3-4 miles to a different blind. And he did it at almost the exact same week from one year to the next. The third year he did it, I killed him, 3 miles from the blind where I usually got his nighttime image on trail camera earlier in the fall. He was 6 ½-years-old and his 10-point rack scored just shy of 160-inches. So if you are frustrated with seeing the same small or average-size bucks right now, be patient because in the coming weeks there is a very good chance a new buck will shuffle around and come visit your does.