The broken record continues. Hot weather and nocturnal deer are continuing to frustrate hunters in the South-Central region. After a... 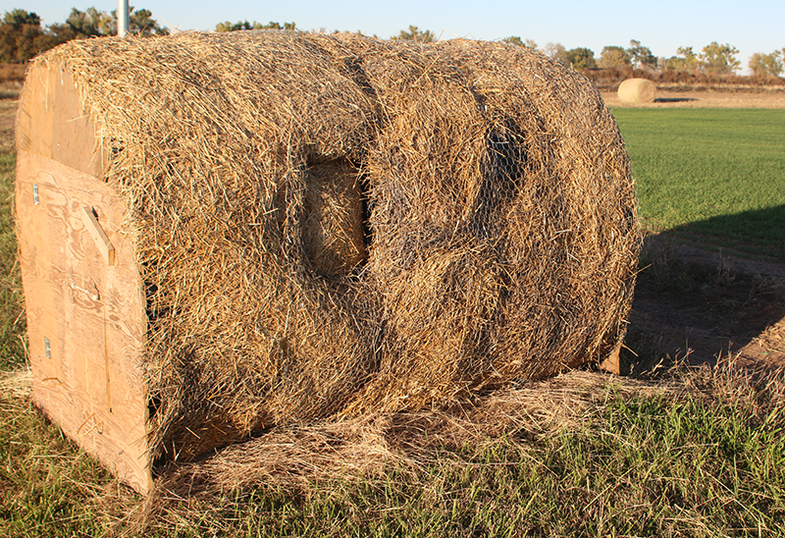 The broken record continues. Hot weather and nocturnal deer are continuing to frustrate hunters in the South-Central region. After a road trip to spend three days hunting good country in the Oklahoma Panhandle, I can confirm that the night-only buck movement is an issue there, too. Despite using crafty homemade hay bale blinds (that’s one above), decoys, rattling horns, and grunt calls, I saw exactly one tiny buck.

My friend Shawn Hoover spent part of his summer crafting two of those fancy hay bale blinds with irrigation wheels, chicken wire, 2×4 boards and real hay. The blinds are slick, and a hunter would certainly be able to kill a buck from one…whenever a buck would decide to move in daylight, that is.

One such blind was set near a corn pile and the other on the edge of an alfalfa field. (By the way, if you want to take your allergies to a whole other level, climb inside a homemade hay bale blind that’s surrounded by lush green alfalfa. Sit still for two hours and see how long it takes your eyes to water, your head to throb, and your nose to run like a faucet.)

Two evenings, I sat in the hay-fever blind on the alfalfa field. The first evening, six does and fawns funneled out at last light. Trailing them, but showing no interest in them, was a small 6-pointer.

The next time I sat there, it wasn’t until sunset, 6:45, that I even saw a deer. A doe and fawn popped through the fence from the creek to eat the green groceries. The light was fading. At last light, two more does and three fawns trotted into the field. One doe got curious and approached my Dave Smith buck decoy. She circled to the downwind side, only 40 yards from my blind, then spooked because she smelled something she did not like. It was only two weeks earlier that Shawn watched a 140-class buck enter the same field, on two separate evenings, in fair shooting light. But no bucks showed this time.

Another evening, I sat in a ladder stand on the creek. The vegetation was so thick, even with an elevated view, seeing a deer in the waist-high sage and grass was tough. I sat from 5 p.m. until dark. I saw one doe at 7 p.m. I never saw her or heard her approach until she was standing like a statue at 19 steps. When I reached for my bow off the hanger, she busted me and disappeared in the creek. I rattled and grunted earlier in the evening, but saw nothing.

So that was the result of three days spent in the beautiful cottonwood creek bottoms, rolling hills, and farm country of the Oklahoma Panhandle. The bucks are there–Shawn has pictures of them on his trail cameras. Sooner or later, the rut has to break loose.