Sometimes you have to go the extra mile to harvest a whitetail buck with a bow and arrow, especially when... 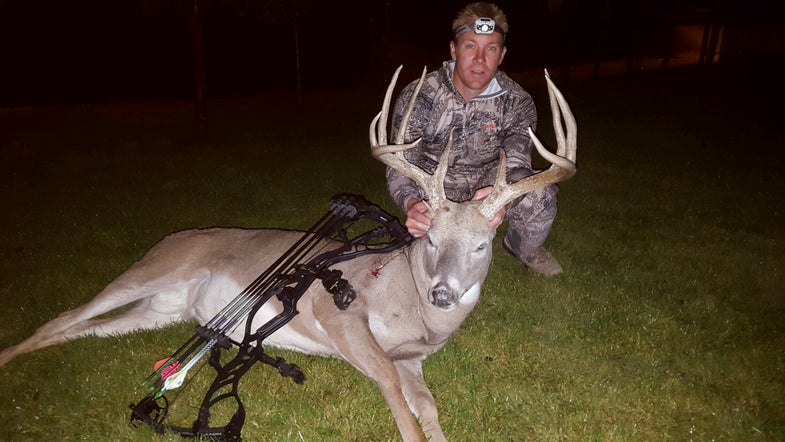 Sometimes you have to go the extra mile to harvest a whitetail buck with a bow and arrow, especially when it’s a particular western monarch. Plans rarely unfold as you had hoped, and oftentimes it takes a little extra effort, patience and and a whole lot of persistence to finally come face to face with your buck. When Utah bowhunter Shawn Beckstrom arrived at Wind River Whitetails in Kinnear, Wyoming in late September, he did just that and was rewarded with a buck named Curly. This is an early season hunt we can all take a lesson from:

Mike and Teresa Rinehart own and operate Wind Rivers Whitetails, which is located along the Wind River in north central Wyoming. Like many scenic locations out west, the river bottom’s irrigated crop and hay fields attract an array of wildlife, to include a healthy population of whitetail deer. According to Mike, “The three key ingredients to growing big whitetail deer are a great food sources, genetics, and a quiet place for these deer to bed down and feel safe. Fortunately we have all three.”

Throughout the summer Mike utilized over a dozen trail cameras in an effort to get ready for the upcoming season, and this past summer one buck in particular seemed to stand out above the rest. His 9-point rack was impressively heavy, especially in velvet, and his long points gave him the complete package. For weeks he recovered trail camera photos of the buck and because his left brow tine curled back, Mike decided to give him the name “Curly.” As the summer progressed, Mike sent updated photos to his bowhunting clients, and when Shawn Beckstrom saw Curly, he knew in an instant that this was the buck he wanted.

As Mike explained, “Shawn is an experienced bowhunter, and when he told me that he wanted to focus on Curly exclusively, I knew he would be a guy who could get it done. The problem we were facing, however, was warm temperatures that really stalled deer movement. When Shawn arrived at camp in late September, we were having temperatures in the middle 80’s during the daytime and lows in the 60’s at night, which is well above average in our area this time of year. These types of conditions make hunting any animal difficult, especially an older age class whitetail.”

“Throughout the week, Shawn was a trooper and stayed the course for four straight days going to the same stand location hoping to see Curly. It was even fun watching him argue with himself on going back to this stand because the movement was really slow, but he knew it would only be a matter of time before Curly made a mistake during shooting light.”

“On the evening of the 5th day, everything came together, and when I received a text from Shawn that said, ‘OMG, I think I just shot Curly,’ I was just as excited as he was. He was every bit the buck I had hoped and will easily make the Pope & Young record book. I believe Curly was a 6 1/2-year buck that is a result of some great patience and management. It is extremely rewarding to see such a magnificent animal harvested by a young man with the skills, patience, persistence, and desire that Shawn showed on his pursuit of Curly.”

Well said Mike, and congratulations to Shawn for a great western whitetail!