Ten days ago, I set out the feed trough, an old, heavy wooden box I found in the barn. I... 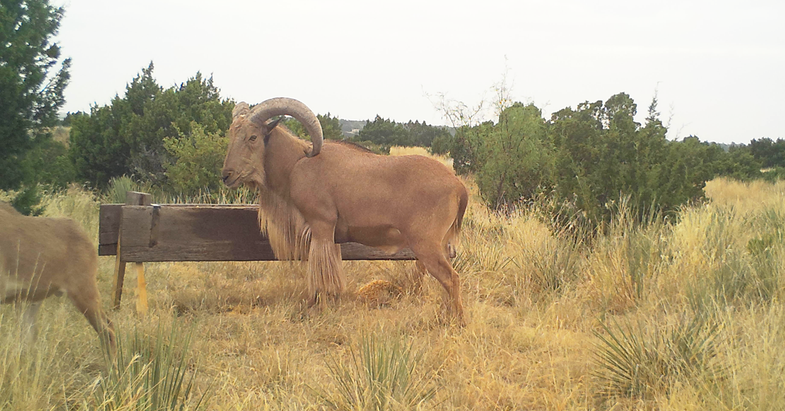 Ten days ago, I set out the feed trough, an old, heavy wooden box I found in the barn. I attached short legs to it with a drill and long screws. Filled with corn, there was no telling what might find it. Whitetails, mule deer, wild hogs—who knows in this part of Texas? So I set it out as a probe, to see what’s out there. That remote section of the ranch has bumpy roads, overgrown mesquites, tall grass, cedars, and no human pressure. What might be living there? A Booner buck or not even a rabbit?
The first check of the trail camera revealed 2,444 photos…of grass blowing in the wind. With no tools and far from ranch headquarters, I pulled most of the tall grass that might be triggering the sensitive camera until my hands bled.

Four days later, I checked the camera again. Only 1,600 pictures of grass blowing in the wind this time, but 90 pictures of something unexpected: a herd of free-ranging, wild-as-hell aoudad sheep. One of them was a monster!

Aoudad or barbary sheep were released in that part of Texas, rugged canyon-country in the Panhandle, in the late 1950s. The sheep took to the desert badlands like they’d been there since the beginning of time. Today, some 60 years later, the sheep thrive in this harsh environment. In a drought year, when turkeys, quail and deer numbers drop, the aoudad ewes are raising twins. Both rams and ewes have horns, but the rams grow much bigger in body size, bigger horn mass, and horn length, plus long chaps and leggings on their neck and front legs. A mature, 10- to 12-year-old ram is spectacular to witness and a rare trophy—three hundred pounds of muscle, brute strength, and agility to scale cliffs with grace.

The ram in the photo is one of those rare monsters. He has it all: Big body size, age, long chaps and leggings, big bases, and good horn length. His horns are so long and curve in such a banana shape that every time he turns his head, they wear a bald patch on his neck, visible in other trail-cam pics. That’s a sure sign of a monster aoudad ram.

So what does all that have to do with deer hunting in Texas right now? It depends on your perspective. I see unexpected exotics as part of the charm of hunting in Texas. Whitetail will always be king, but Texas has so much more to offer. In the Hill Country, where a variety of exotics is even more common, species such as axis deer, fallow deer, or blackbuck antelope might interrupt a whitetail sit. Those invaders just enrich the experience, I say. The diversity is exciting, but some folks say the invaders spoil a pure deer hunt.

All I know is that there’s a big ram in my trail camera, more than once, and there’s no bag limit or closed season for aoudad sheep. Guided hunts for aoudad fetch as much as $4,000-$7,000. What would you do? Invest some time to hunt a giant, ghost-like aoudad ram or move to a different spot to hunt deer? Guess which option I’ll choose.