Ray: A Stalk on a Chasing Buck

Rut Reporter Brandon Ray is an expert on the region. Ray was born in Dallas and shot his first deer... 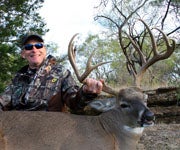 Rut Reporter Brandon Ray is an expert on the region. Ray was born in Dallas and shot his first deer with a bow in Central Texas at the age of 15. The full-time freelance writer manages his family’s Texas Panhandle ranch, is a licensed New Mexico guide, and last year took a 184 gross P&Y non-typical trophy. States covered: TX, OK, NM.

The first real report of any significant rut chasing this week came from an old friend in north Texas. The story goes like this.

Hunter Mike Terry and his guide, the ranch manager, set out to hunt a specific old buck: a big-framed 10-pointer that had been seen at two different blind locations on trail cameras. Instead of taking a gamble on where or even if the big buck would show at either blind, the ranch manager decided the timing was right (pre-rut) to try rattling. The ranch is on MLD (managed land deer) permits, so rifle hunting is allowed in the month of October.

They waited for good light in the morning and started in the direction where they believed the old buck lived. But on the way there, they spotted a bunch of deer in the distance: mostly does, a couple of small bucks and one giant. It was the big 10-pointer!

The giant buck was totally obsessed with one specific doe. He was chasing her with his neck stretched out, rubbing trees as he trailed her–he was crazy in love. So the hunter and guide decided to ditch their initial plan and try a stalk instead. The buck was about a half mile away.

They cut the distance in half without much concern. Then it got dicey. Lots of sharp-eyed does were on alert. The does started getting nervous as they got closer. And then, like a tidal wave gaining momentum, all the does sprinted for cover. Every single one except THE doe! She stayed by the buck, hesitant to leave. She was probably in heat. And if she wasn’t going, guess what, neither was the buck! That’s the magic of the rut. It’s the one time of the year old bucks let down their guard.

So when the buck stepped clear of some mesquites behind the doe, Terry rested his rifle for the 200 yard shot. The buck was hit in the heart.

The ranch manager, a seasoned wildlife biologist, aged the buck at 7 1/2-years-old. The old buck had a live weight of 177 pounds. His 10-point rack had an extra kicker on the right G-2 with long beams and long tines. The buck’s big rack gross-scored 165 3/8 B&C.

This is just the sort of story that makes the magic of the rut live up to all the hype!