It was 5:25 p.m. on November 9 when I let the arrow fly. The skinny Victory carbon arrow looked to... 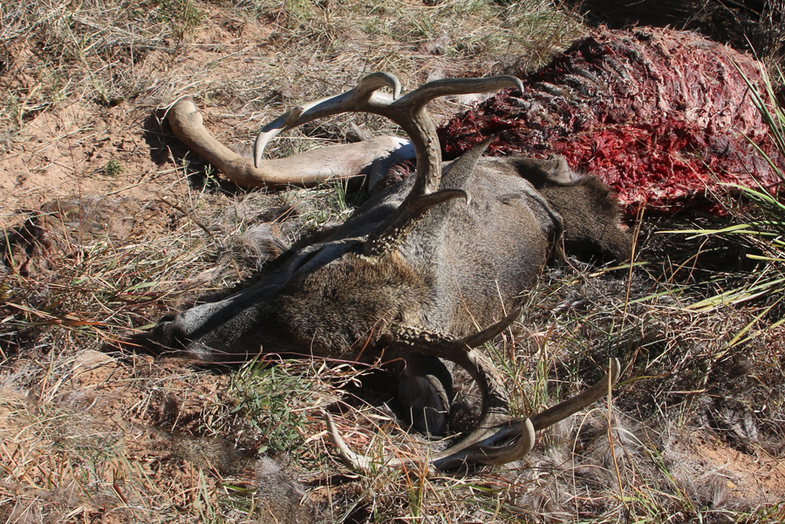 The skinny Victory carbon arrow looked to hit the Texas Panhandle 10-point buck low in the chest at 20 yards, angling downward slightly. The buck just turned and walked away, showing no reaction to the arrow. At first the trail was good, dark red blood continuously dripping to the dry ground and two large pools of bubbly, pink froth in it, a sure indication of a lung shot. But at roughly 90 yards from the hit, the blood completely stopped.

My friend Jeff Bonner showed up at about 8:30 p.m. with his two tracking hounds, Annie and Tebow. I’ve used them before to help me recover deer, and they always amaze me at what they can find. On this night, something was difficult for the dogs to unravel. They made it about 150 more yards past the last blood, but seemed unconfident of what they were following, losing interest in it. We worked the trail until 1 a.m., but found nothing, not even a drop a blood beyond the last one I had found in daylight. Jeff told me that considering past history with those two dogs, he felt that the dry creek, where the dogs had eventually led us, was where the deer had gone.

I returned to the area the next day, walking the dry creek and wandering through the thick cedars and tall grass until early afternoon. I looked for crows and buzzards and listened for coyotes, but found nothing. I knew my arrow had hit at least one lung, but due to the angle and low exit, figured it had probably missed the offside lung. That night, an epic cold front blew through with 40-50 mph winds and temperatures as low as 18 degrees.

On November 11, I got to the rim of the canyon around 11 a.m., to glass the bottom for any sign of the deer. Immediately I heard a crow cackling, circling above me. When I set up my spotting scope to dissect the cedars, where the dogs lost the trail one mile below the canyon rim, I saw a coyote sitting in the shade of a juniper tree. He was gone after three or four seconds, but then I spied two crows on top of a juniper tree 20 yards to the left. Having crows and a coyote in the same spot and only about 100-150 yards from where the dogs lost the trail on my buck was enough reason to load up for another hike into the bottom.

By 1 p.m. I was walking down the dry creek and soon saw two crows fly off the top of a juniper tree. As I walked toward it, north wind in my face, the stink of rotting flesh hit my nose. I ran upwind and saw a red rib cage sticking up, and white antlers.

As I suspected, my arrow had hit the near-side lung and the exit wound was too low on the offside. The buck had traveled 350 to 400 yards from where I hit him. The hindquarters, guts and rib meat were all gone.

I’m pretty sure this is one of those “shuffling” bucks that moves into different territory looking for does during the rut, and one that I have not seen in two years. His rack is basically identical to what it was then. His back molars were worn smooth with the gum line; I’m guessing he was 8 ½ years old. Later I rough-scored his 10-point rack at 138 inches gross.

Of course this is not the way I wanted to find my deer. Coyotes had eaten the meat, and the cape was ruined. But I had closure as I fixed my tag to the deer’s rack. It’s another example of why quit can never be in a deer hunter’s vocabulary.