Rut Largely Over, But Some Hunters Finding Success

Overall activity status: Some bowhunters in Idaho and a few remaining raffle- and damage-hunt hunters are still in the field,... 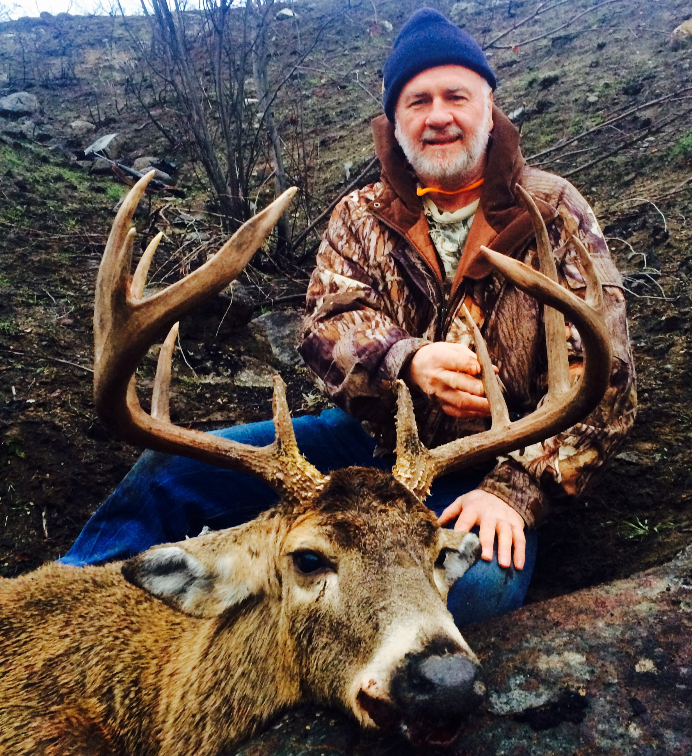 Overall activity status: Some bowhunters in Idaho and a few remaining raffle- and damage-hunt hunters are still in the field, but seasons mostly draw to a close soon. Rut activity has slowed to a trickle out West, and interest has turned elsewhere for most sportsmen except for a few diehards holding out for trophies. Otherwise, whitetail season 2014 is in the books, and a fine one it was. Populations are strong almost everywhere right now out West, and harvests appear to have been strong.

This beautiful whitetail fell last week in mule deer country in north-central Washington’s Okanogan County, feeding on a lush greenup that erupted after one of 2014’s largest Western wildfires. Thanks to strong summer and fall rains, the Carlton Complex Fire that devastated a quarter-million acres of prime deer habitat began an early recovery.

“My good friend, Jim, got very lucky and drew a unique three-species raffle tag and had already harvested his bighorn sheep and mule deer, and finished with this dandy whitetail to cap his season,” said guide Jerrod Gibbons of Okanogan Valley Guide Service in Omak, Washington. “I had spotted this buck a week prior and happened to capture phone scope pictures of him. Immediately I sent them to Jim to see what he thought. It had been a rough season for him spotting whitetail, and he was excited to see quite a beautiful buck. I told him he was in his winter range and would not be hard to find again.”

“The first day Jim showed up, we hiked to a small vantage point overlooking the flat where I have always seen him. With in ten minutes I spotted him with four other bucks. He stayed in the far side and fed rigorously, showing no interest in the rut. Long story short, it never happened that night because he stayed out about 500 yards and fed off the flat the opposite way. Knowing there routine from past year, I told Jim they will be feeding back our direction in the morning. So the next morning we hiked to the same point and poked our heads over to see seven bucks at 200 yards right in front of us. The two small bucks were sparring, and the big buck was heading for them. He pinned his ears back and we immediately knew it was the one we where after. Jim took his rest and the deer stopped and looked broadside. We recovered him 30 yards from point of impact.”

Daytime movement: Absurdly warm weather and precipitation has been the dominant weather pattern, so bitter cold has not driven deer to feed all day. Nonetheless, they are moving into winter patterns and are conspicuous around food sources during the day. I observed this firsthand in Washington and Idaho over the past few days, although I saw very few bucks in places they were standing roadside a few weeks ago.

Scrape making: Bucks have kept scrapes open in north Idaho, where Troy Pottenger of Whitetail Addictions is holding out for a trophy until the end of season. The big buck he’s hunting has continued to open scrapes on a regular basis, but to say that whitetails are still actively scraping out West would be an exaggeration, I believe.

Fighting: None observed or reported.

Chasing: Rich Lindsey of Priest Lake, Idaho has been watching and photographing a nice buck that survived the season, and it has been chasing does, but disinterestedly, says Lindsey. His observations echo those of a few ranchers I know who have seen the bucks become a lot less conspicuous and focused on food instead of females.