Faithful Rut Report readers might remember Tanner Alexander, who shot a dandy 170-class buck three years ago in the Texas... 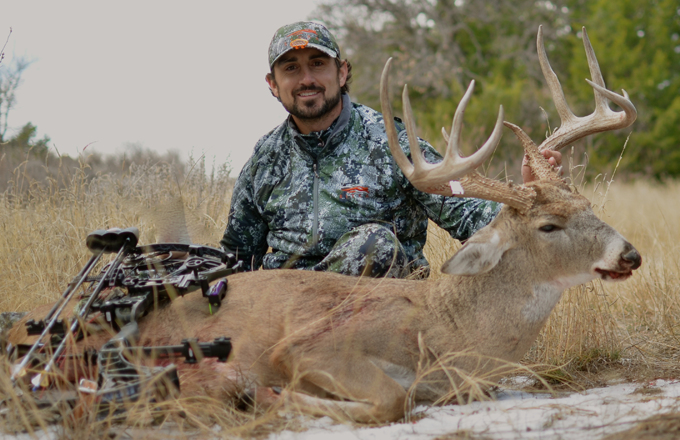 This season, Tanner did even better.

Like most hunters, Tanner has limited days off from work to hunt deer. This year he picked the week before Thanksgiving to hunt in the Panhandle. If the weather cooperates, that week is always good to hunt in that part of the state because bucks are either cruising for or actively chasing does.

On November 20, Tanner sat in the same tree where he shot that 170-class stud three years ago. Bucks were out cruising and responding to rattling. Tanner spotted a big buck 500 yards from his tree at 11:45 a.m. and hit the horns together. The buck responded immediately, running at first and then coming at a steady walk. Eventually the big white-antlered 10-point walked to the downwind side of the tree. Tanner picked a V in a cottonwood trunk to send his arrow at the buck’s chest from 28 yards away. The buck went 100 yards and crashed. The heavy-horned trophy, above, had long beams and tines and rough-scored at 160 inches. It had one tooth left in his mouth–an ancient old animal.

The following day, November 21, Tanner moved to a different property in a different county. With one buck down, he was there mostly for the experience, knowing he would not shoot again unless a giant showed up.

By 9:30 a.m., he had seen at least eight different bucks cruising. At 10 a.m. he rattled and a couple of small bucks responded. He glassed them at 200 yards, thinking one was a nice buck he had seen earlier, and realized it was bigger—much bigger. Tanner tickled the rattling horns together and the old brute started coming closer. At 30 yards, the big whitetail destroyed a small tree with his massive rack. From there, the buck bristled up, ears pinned back and walking towards Tanner. At 18 yards, Tanner drew his BowTech bow and let the arrow fly. The buck went 20 yards and fell. Tanner rough-scored the symmetrical giant, below, at 180 inches.

Some important lessons about Tanner’s hunt: First, he shot both bucks at midday, a time when most hunters would be back at camp. During the frenzied pre-rut and peak rut, try to make yourself sit longer on stand, all day if possible. Second, Tanner called both of those huge bucks into bow range. If not for his rattling horns, both of those big bucks might have cruised by out of range. Timing was obviously important, as bucks were actively cruising and searching for does. Tanner carefully selected his days off from work to hunt, focusing on that time when he thought bucks would be active in the rut–and it paid off.