Overall activity status: A few random reports of a lone buck chasing or sniffing a doe in the northern half... 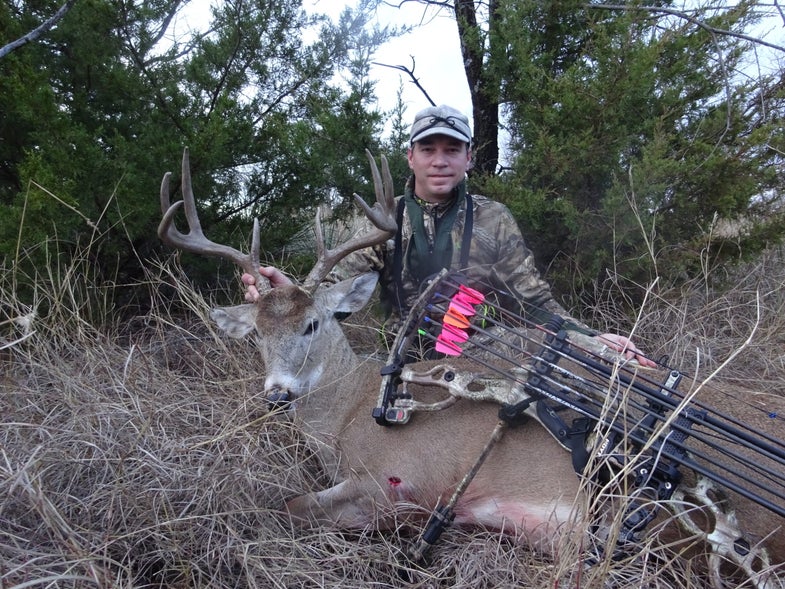 Overall activity status: A few random reports of a lone buck chasing or sniffing a doe in the northern half of the region are still coming in, but for the most part rut action is over there. However, it is prime time in south Texas. Robert Sanders at the Temple Ranch reported the following.

“Rut still very strong and evident. This is the time when you will see 2-3 bucks chasing one doe. The rut is beginning to take a toll on bucks’ health. They have already lost 15-25 pounds of body weight and many have broken tines. Injuries of all kinds have been observed on the bodies of harvested bucks. Now is a great time to be hunting. Rattling works very well now. Targeting a specific buck is very difficult now due to dispersal from the rut and bucks not interested in feed.”

Fighting: In south Texas, fighting is at its peak. Sanders reports finding a couple of bucks dead from injuries they sustained in battles.

Chasing: When a buck or multiple bucks are frantically chasing a hot doe, it can be difficult to get the buck standing still long enough for a sure shot. I’ve never had the nerve to do this, but I know people who have. If the doe being chased stops, drop her with a rifle shot. Nine times out of ten, the pursuing buck or bucks will stand around and watch her, waiting for her to get up. That will give you a clear shot at the buck you want, and you will notch two deer tags at once. One friend, who dumped a doe being chased by two bucks dumped a doe in a food plot, said that one of the pursuing bucks began mounting the lifeless doe. Only during the rut do you see such behavior.

Estrous signs: If you are on stand in the brush country this month and see a doe, watch behind her. If she acts nervous, twitches her tail, or looks over her shoulder, chances are good that a buck is following her. Be ready.

Rub making: At this point of the season, most bucks do not expend energy to make new rubs. Rubs are mostly an early and mid-season sign.

Daytime movement: Kyle Barbour, in the photo at top, arrowed this fine 127-inch 9-point in the Texas Panhandle on Sunday. Unlike earlier in the season, when shots at mature bucks are usually during the first or last 15 minutes of light, Kyle’s buck showed up 1 ½ hours before dark. In my experience, that’s more common in the late season than at any other time of the year. Kyle got in his pop-up blind at 4 p.m., had a small four-point walk by five minutes later, and another small buck five minutes after that. At 4:25, the 4 ½-year-old 9-point he had previously only seen on trail camera stopped at 26 yards. Kyle made the shot with his Hoyt Carbon Spyder bow. The 400-grain Easton AC Injexion shaft tipped with a 100-grain Solid broadhead passed through low in the mature buck’s chest, and the animal only went 50 yards.

X factor: Don’t overlook bonus game during a late-season hunt. Game like hogs or javelinas can liven up a slow deer hunt. Turkeys are also legal in most good deer hunting counties; check regulations for bag limits and season dates.