Before the rut ramps up, it’s a good time to get creative with some of your setups. Specifically, I’m talking... 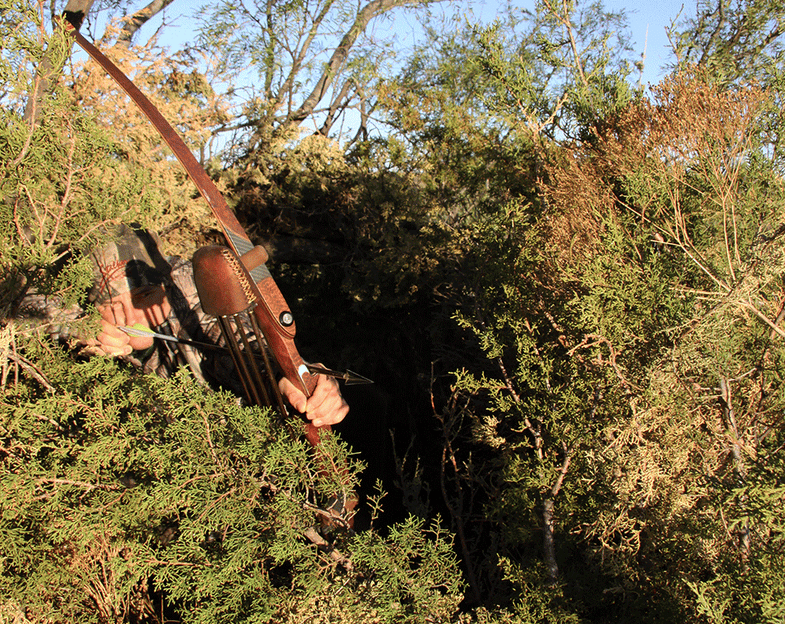 Before the rut ramps up, it’s a good time to get creative with some of your setups. Specifically, I’m talking about ground blinds.

It was 30 years ago that I got serious about bowhunting deer. Back then, in Texas, that meant either sitting in a tripod stand or building a ground blind out of natural brush. Then and now, in the best deer counties, there aren’t always mature trees to support a tree stand. So I became somewhat of a ground blind artist.

Using brush loppers, leather gloves, slick wire, camo netting and a shovel, I could build an elaborate hideout. Half pit blind and half ground blind, I always built them to have a dark interior and some sort of brush or branches overhead to keep me in the shadows. I usedCedar branches, mesquites and broom weeds to fill in the blind’s side walls. I’ve killed hogs, javelinas, whitetails, mule deer, pronghorns, and turkeys from these natural brush hideouts. The animals pay little attention to them as long as you hunt them sparingly when the wind direction is right. That’s South Cox of Stalker Stickbows in the photo above at full draw in one such blind from several years ago. He arrowed a nice 8-point whitetail with his longbow from that setup.

Today, we have pop-up blinds. No doubt they have made the ground blind game easier. I use them weekly. Just last week I guided an archer to a world-class, free-ranging aoudad ram from a pop-up, specifically a Primos Club XL blind. The herd of 20-something sheep was only 20 yards away. None of them paid a bit of attention to our blind.

It all started with the first designs from ground blind pioneers Keith Beam and Brooks Johnson of Double Bull. Those guys were generous to me, I don’t know why, but always sending me blinds to use for hunting. If a photo of the blind or mention of it showed up in print in a magazine article, that just educated readers to the possibilities, and deadliness, of using ground blinds. Today, Primos owns the Double Bull brand and using ground blinds is common place for deer hunters whether you hunt Texas, Kansas, or Alberta.

Ground blinds should come with a warning label. WARNING: if there are any cattle within 10 miles of this blind, they will find it and lick it, rub it and stomp it into a pile of broken poles and ripped canvas. I’ve lost several nice blinds to Herefords and Angus cattle. One time, I even had a rogue spike bull elk decide to shred the back door with his 2-foot long antlers. Today, if there’s cattle in the same pasture, I don’t use a pop-up. Another option is to stake T-posts and run a single strand of barbed wire around the entire blind. It’s worth the extra effort to save a $400 investment.

Aside from natural brush blinds and pop-up blinds, junk piles work too. I’ve ambushed mule deer and whitetails while hiding in a pile of old farm equipment. I shot a fine pronghorn buck from a blind built next to a discarded cotton trailer by a windmill. Several years ago, I shot a 4×4 mule deer while sitting in the stinky, dark confines of a chicken coop.

Trees are wonderful for their elevated view and the ability to keep your human stink above the nostrils of wild deer, but there are other ways to kill one. Personally, I like the eye to eye chess match that comes from hunting deer from the ground.