January 16, 2016 For the past six weeks, I’ve been hunting a giant non-typical buck like a man possessed. That... 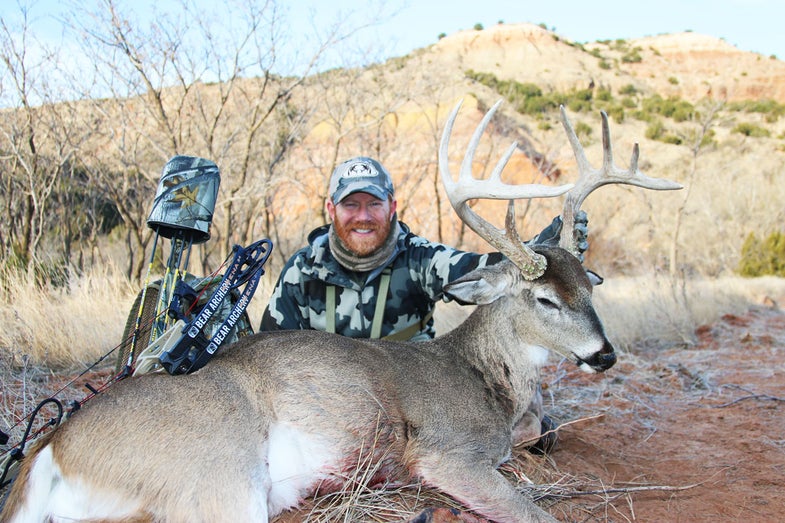 January 16, 2016
For the past six weeks, I’ve been hunting a giant non-typical buck like a man possessed. That old buck was on my trail camera on December 3 for about an hour in the morning. He had matching forked G-2s, several small drop tines, and mass on his beams like a small bull elk would. I guessed his rack was about 180 inches. In mid-November, a friend filmed the same buck on a non-hunting, neighboring property 1.3 miles from my blind back, and I’ve hunted tirelessly for that Texas deer every time I can. In the process, I passed a dozen other bucks, from spikes to mature eight- and ten-pointers. Sometime around Christmas, it set in that I probably would not see that non-typical buck again. He was not on my trail camera before December 3, and I haven’t seen him since. So I’ve kept my hopes up, but decided a mature 10-pointer I’ve passed up twice is too good to let walk again. I’ve nicknamed the buck “Lucky.”

Just because Lucky is my second choice, that does not mean that he isn’t special or that he’ll come easily. Four more encounters later, and some 30 days of hunting since December 3, I still have not connected. I’ve been hunting a managed lands deer permit (MLDP) ranch where the season is extended. I’ve endured snow storms, freezing temperatures, 5 AM wake-up calls, and damage to my truck, but yet Lucky still lives. I’m no quitter, so I’ll keep hunting him through this month. If I get him, I’ll send Field & Stream a special post to let readers know what happened.

Even if Lucky evades my best efforts, it’s been a helluva season. My freezer is full of venison sausage, bacon, snack sticks, hamburger meat, and steaks. And my taxidermist is getting rich and I’m left wondering where to put more deer mounts. As far as the rut is concerned, it always seems easier to pinpoint the peak of buck activity in hindsight. Looking through my journal, I can see that it was the first ten days of November, when I saw mature bucks chasing does in the northern part of the region. An old-timer once told me that when you see only small bucks chasing does, the rut is not really on yet. But the first time you see a big, mature buck in a clumsy chase with a doe, that’s when you should begin hunting all day for the next 10 days or so. I’ve found that that advice rings pretty true.

Based on conversations with hunters from around the region, the 2015 season was great. There were tons of better-than-average bucks killed, including some real giants, too. Need proof? Go to the loscazadores.com deer-contest website to see pictures of some of the year’s biggest from the brush country of South Texas. Also, timely spring and summer rains in 2015 helped boost bucks’ antler growth across the region. How wet was it? On my family’s ranch, near Amarillo, Texas, for example, we got about 35 inches of moisture in 2015; the average per year is closer to 19 inches. All that rain meant lots of food and cover for the deer.

More good news about 2015–2016: All that moisture means the country is recovering well from the extended droughts that hit hard in 2010, 2011, 2012, and 2013. The 2014 year was the first to show signs of the drought letting go, and now 2015 and early 2016 are wetter than usual. That moisture means that the earth and the plants are healing, and even flourishing now. The 2015 season also saw a bumper fawn crop. Altogether, this means lots of new deer were recruited to the population, a big plus considering that during the drought years there were very few recruited, in addition to high adult mortality.

It’s a little early to make predictions, but so far the outlook for the fall 2016 deer season is good. All those fawns recruited and above-average moisture means that the deer population and the land are in good shape. If we get another wet spring, which the weather experts are predicting, the bucks should grow larger-than-average antlers, and there should be lots of fawns added to the population.

I’m still hoping to put one more deer in the freezer and write one more deposit check for the taxidermist, but if Lucky eludes me, I’ll know where to look for him in fall 2016.

January 22, 2016
This morning, after 32 days of hunting since early December, I finally connected on a special buck. I nicknamed that heavy-horned Texas 10-pointer “Lucky,” since I let him walk twice in hopes of encountering a much bigger non-typical. That non-typical was seen just once on my trail camera, on December 3, but hasn’t showed up since.

Like many mornings before, it was bitterly cold, with the temp at 24 degrees, and the wind chill pushing it down to 17. I had on three bottom layers, five top layers, a neck gaiter, a stocking cap, two pairs of gloves, and five hand warmers stuffed in strategic places. My breath came in frosty plumes. I was able to hunt at this late date because the ranch is on a level three MLDP, which has an extended hunting season, going all the way until February 29.

Lucky was the eighth buck I saw that morning. A bigger-bodied 8-pointer lowered his head to intimidate Lucky and pushed him toward my shooting lane. With the deer at 18 yards and broadside, my arrow hit him in the heart. Sixty yards away, following a good blood trail, I found him stone dead. He was smaller-bodied than I’d expected, making his rack look even bigger. He had 5 ½-inch bases measured below the brow tine, and that mass was carried out through the beams. Tooth-wear suggests that he was at least 6½ years old.

A fine buck to end an unbelievable season and a good excuse to sleep in this weekend.