It’s roughly two weeks until the Texas archery opener on October 3. In my backyard in the Panhandle, bucks are... 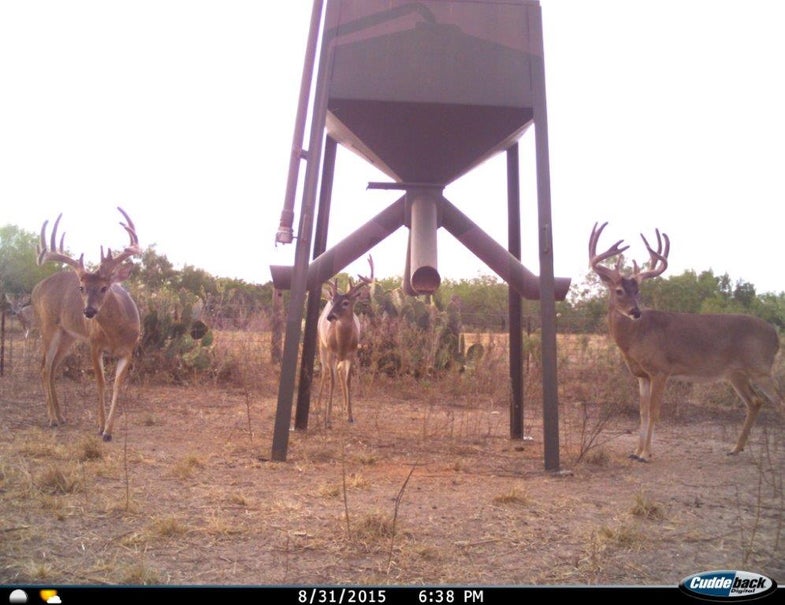 It’s roughly two weeks until the Texas archery opener on October 3. In my backyard in the Panhandle, bucks are very nocturnal right now. With the exception of a few early-morning pictures of does, all of my trail camera pictures of bucks have been in the dark. Ninety degree heat every day has the boys acting like vampires. But it’s not that way everywhere.

Robert Sanders, manager of the Temple Ranch in South Texas, shared some trail camera pictures of some fine velvet-racked bucks in the brush country. The pictures were in the daylight. Those cactus-country bucks are better adapted to the heat perhaps. Proof that whitetails react differently to the heat depending on where they are.

Robert shared the following on deer in his area.

“I’ve been here at the Temple Ranch for 18 years. With the good spring and early-summer rains we had this year, turkey and quail numbers are way up and antler growth is excellent. The landscape got drier in the summer, but the plants got lots of moisture earlier in the year. Probably the best year since I’ve been here for big bucks. We did not feed protein this year during the antler growing months and bucks still grew huge racks off the groceries from Mother Nature. Bucks are still in velvet now in mid-September. Typically, they start to shed down here in late September. By mid-October, all the bucks will be hard-horned.”

Due to above-average moisture this year, South Texas is primed for a great deer season.