There is something special about your first whitetail buck, but when it’s an over-sized brute that will adorn your trophy... 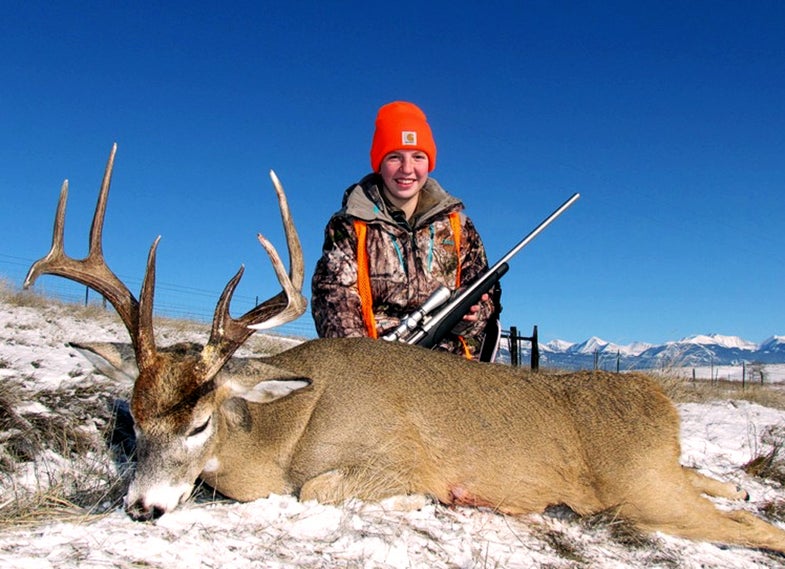 There is something special about your first whitetail buck, but when it’s an over-sized brute that will adorn your trophy room, it makes the experience even more memorable. Alaska resident Britainy Westcott did just that when she hunted with Keith Miller of Montana Whitetails a few days ago. Like any seasoned whitetail hunter, this 16-year-old young lady dreamed of killing a monster buck, but she really never thought it would happen. With temperatures near zero and the hunt winding down, however, this novice whitetail hunter did what any veteran hunter would dream to do.

Britainy was hunting a ranch along the Shields River, where Keith knew this particular buck was living. His heavy 8-point rack was hard to miss, and when he stepped out into a field everyone took notice. He had been spotted during the early season more than once, and some bowhunters in camp the previous weeks even had encounters with him, reported Keith, but clean shot opportunities eluded them. With the rut beginning to unfold, Keith knew that it would only be a matter of time before an opportunity would present itself, and with a young hunter in camp who had never killed a whitetail, he really wanted the crosshairs lowered on him.

Keith set up ground blinds where the buck liked to travel, as well as where he preferred to feed, hoping Britainy would have an opportunity. However, with the rut in full swing the buck could really show up anywhere. Although Britainy is young and was itching to kill her first whitetail, she had remarkable patience and kept her finger off the trigger. “She hunted four days without seeing this particular buck and was itching to shoot a buck as the week was winding down,” said Keith, “but on day five everything came together.”

With temperatures touching a negative 12 degrees at daylight, Keith knew deer activity would pick up as the day warmed. “The cold weather was a bit too much for her to sit before daybreak,” said Keith, “but knowing when the deer preferred to move in such conditions, even during the rut, we figured that we would put her in the blind just before peak movement started and temperatures warmed above zero.”

When mid-morning arrived, Britainy and her guide headed to their blind, hoping the buck would show, but they never made it there. As they were walking in, movement caught their attention, and it was clearly the buck Keith and Britainy were hoping for. “After playing hide and seek with the buck as it moved through the brush,” said Keith, “she made a perfect shot at about 100 yards, to harvest her first-ever whitetail deer.”