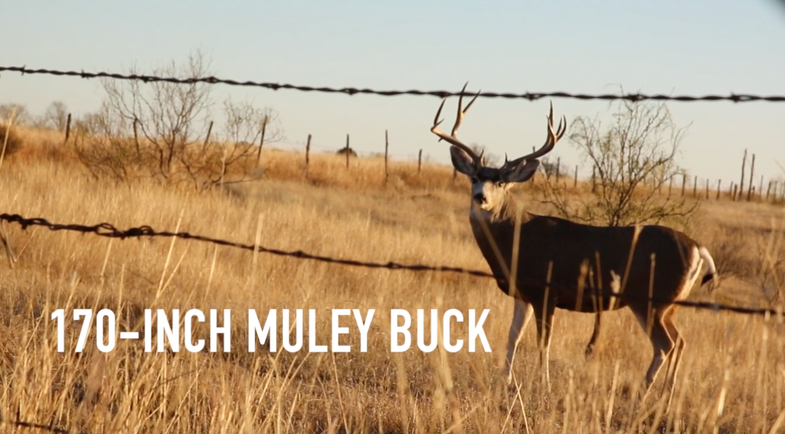 Overall Activity: After two months of monitoring a big 12-point mule deer, almost exclusively through nighttime images on trail cameras, finally, on November 21, I met the vampire buck at close range in daylight.

It was cold, 35 degrees, and I hoped the cold weather would have the bucks on their feet earlier than usual that afternoon. Sitting in a ground blind I placed at a fence crossing, the wide-racked muley approached the fence behind two smaller bucks at 5 p.m. I managed about two minutes of video of the buck coming towards the fence, but he saw something he did not like, then turned and walked away. I set the camera down and focused on the hunt. He walked back to the west and bedded down 200 yards away where I could see him. The two small bucks were sparring and pushing and shoving not 40 yards from my blind for almost one hour. At sunset, another small buck approached the scene. When the three small bucks finally vaulted over the fence, the big buck stood from his bed and started to head back my direction. At the last minute of shooting light, the big buck was over the fence and only 15 yards away. My arrow hit him behind the left shoulder, but the angle was slightly quartering-to. The buck trotted 100 yards into a CRP field and bedded, his antlers visible over the tall grass in the fading light. I waited almost an hour, then tip-toed out of the area.

The following morning I found the buck in a second bed, but only about 200 yards total from the blind. The 200-plus pound deer had a gorgeous cape with a rack bigger than I’d estimated. His outside spread was almost 27-inches and he scores in the 170’s.

Fighting: For the northern half of the region, now is the time when rattling antlers and grunt calls are usually effective. I’ve heard a few hunters report bucks responding to horns, but I have yet to rattle in even a small buck this season myself. If a good buck is passing out of range, you have nothing to lose by rattling or blowing a grunt call at him to try to get him coming your way. For that reason, horns and calls should always be close at hand this time of year.

Rub Making: The mule deer rut will be approaching in early to mid-December. Fresh rubs have popped up just this week on small mesquite trees near a corn feeder where I only see mule deer (no whitetails).

Chasing: On November 24, I watched a small 8-point in the Texas Panhandle chase a doe like a cutting horse at 11:30 AM. The chase took place in a plowed field at least one mile from any significant cover. At least once a year I see one of these sorts of chases in an odd place. That to me says the rut is on when deer are chasing at odd hours of the day in odd places where you typically would not see them.

Daytime Movement: Shawn Hoover, hunting with his sons in northwestern Oklahoma during the rifle season, reported seeing three big, mature bucks on their feet in shooting light this week. Bucks he had no prior experience with. The boys eventually collected one of the bucks, a 150-class stud with worn teeth to indicate he was 7 ½-years-old or older. The hunt continues for the other two big ones.

Estrous Sign: Hunting a Panhandle creek bottom, I’ve seen very few does, but several nice bucks. Every doe I’ve seen has been alone, no fawns, and skittish to the point of paranoid.

X Factor: Just before a major change in weather and just after the storm passes are always good times to catch deer up and moving, trying to find feed to fuel their bodies in the cold.

As we enter December, the best hunting of the year will crank up in the brush country of south Texas. Bucks rut later in deep south Texas than they do in the rest of the state with some rut action spilling over into January.