Waiting Out the Warmth in the West

In Idaho, where it has been very warm by typical standards, Troy Pottenger has two large bucks visiting a mock... 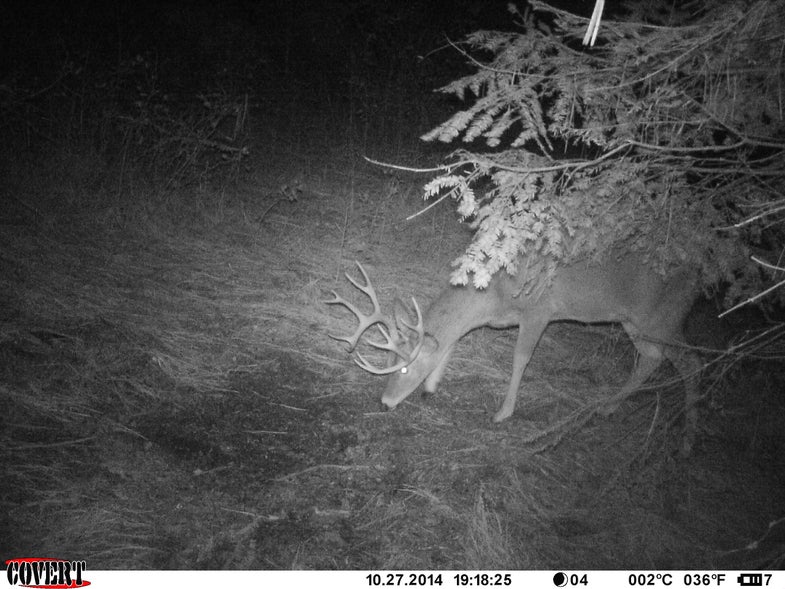 In Idaho, where it has been very warm by typical standards, Troy Pottenger has two large bucks visiting a mock scrape regularly within minutes of shooting light. One of them, the 7×7 above, illustrates the changes in behavior taking place right now.

“This buck and my mock scrape are on public land,” says Pottenger, who’s hunting in the northern part of the state. “Three days after I prepped the scrape, this big guy I call 77 was on it, along with a doe. I purposely put the camera at 9 feet high and back off the scrape a good 20 feet. He was very camera-shy earlier this summer, and this is the first time he hasn’t looked up at the camera in any way.”

“Bucks are snooping and already making and investigating scrapes everywhere I’m hunting. So are does. I found my first buck scrape a week ago near a big buck’s core area. I have been after him since I first got him on trail cam in July. I found this buck by implementing a mock scrape back in July, and within 48 hours of re-prepping it on Oct 27th, he was back to check it.”

Pottenger spends more time in the woods than anyone I know, and nobody I’ve ever met kills half as many big public-land whitetails. Along with his filming for Whitetail Addictions TV, he’s also a pro staffer for Nextbuk and Xtreme Outdoor Products tree stands. I asked him to detail his process for making a mock scrape.

“Just scratching the ground and throwing out some deer urine anywhere will not elicit results. I’m extremely careful not to spoil a scrape with any human scent. Rubber boots and latex gloves are a must. Building mock scrapes close to where big bucks bed gets the best results right now. Big deer want to know who has moved in close to them. Couple this strategy with overlapping doe bedding to feeding areas and you may just create a community hub scrape over time, which can and will condition all the deer in the local area to stop by the local hangout.”

Pottenger’s in-the-field observations closely match those from other sources in the Inland Northwest: the pre-rut is near its end, bucks are investigating does, and balmy western weather may be contributing to a lull. That lull will likely be short-lived based on the inevitability of biology, but the warmth is exacerbating the tension as we wait for the rut begin to pop.

Hunters downed quite a few nice whitetails in Idaho over the last week, but reports from around the West region point to spotty rut activity. I heard more about dopey mule deer bucks than I did whitetails, although there were some notable exceptions.

Frosts have yet to come to some western whitetail habitats, but most of the West has at least seen a killing frost. Even when snow has fallen at times in the Northern Rockies, warm, stable weather has moved back in.

I postponed my own Halloween Idaho whitetail hunt to wait for conditions to improve. Heavy pre-rut activity near Whitebird and Grangeville, Idaho, last week was somewhat stymied when hunters killed several mature bucks that had spent the summer in the open breaks above the Salmon River where Killgore Adventures guides. Many new bucks will soon move in on the large doe population, and when they do, I’ll make the long drive and begin my quest for three whitetail bucks in 2014. My wife wants to stop eating store-bought meat, so I have the super-green light to hunt!