Warm Weather Dampens Activity, But Rut Signs Are Finally on the Rise 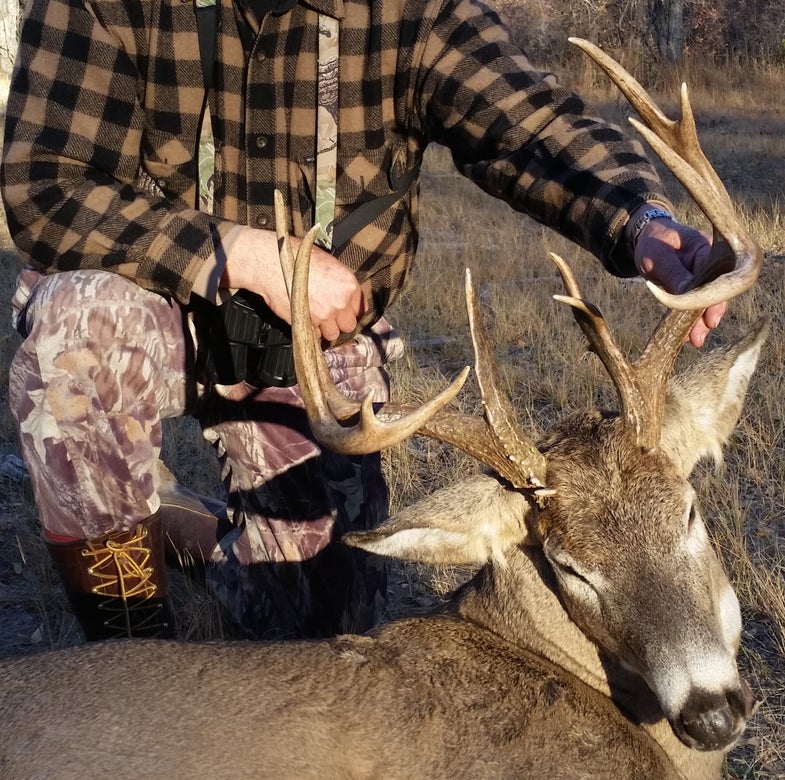 Dr. Michael Cummings of British, Columbia, Canada, visited Wyoming’s Wind River Whitetails for the tenth consecutive year and was rewarded by this pig of a buck with a unique rack. That same buck was featured in a trail cam picture in one of my reports earlier this month.

The buck’s large body was very apparent in that picture, but not even owner/operator Mike Rinehart knew the animal would be so heavy.

“We just got back from Lander, Wyoming checking him into the taxidermist and the meat processor,” said Rinehart. “We knew we had a giant on our hands so we weighed him whole this morning. When the scales settled out, we were in shock and disbelief that it read 320 pounds. The processor said it was the biggest-bodied deer of the season and was also in shock that it was a whitetail and not a mule deer. We have not scored this deer as of this posting, but believe he will be in the mid to high 150s.”

Rinehart is equally surprised at lingering warm weather and its apparent slowing effect on the rut’s progression. Every time the weather seems about to turn the corner, mild conditions persist.

“When we left the lodge this morning at 5:30 a.m. it was 48 degrees and it should have been 28. Nevertheless, this big guy showed up just after daylight, and we were able to get him on the ground. It’s good, however, to see the deer are finally beginning to ignore the weather a little. The bucks have moved out of their bachelor groups and are finally scraping and running the river.”

Last year, bucks were rutting hard by early November in Wyoming, and the pre-rut was much further along by late October. Meanwhile in The Inland Northwest of western Montana, north Idaho, and eastern Washington, Whitetails have been in pre-rut patterns for weeks, and hunters are beginning to observe bucks showing interest in does and mock scrapes. Two sources are in the field right now, high in tree stands with rattling antlers in hand. I’ll report very soon on their observations and on my own as I take the field in Idaho on Halloween.