Washington Deer Adjust to Hunting Pressure on the Opener, And So Do Smart Hunters 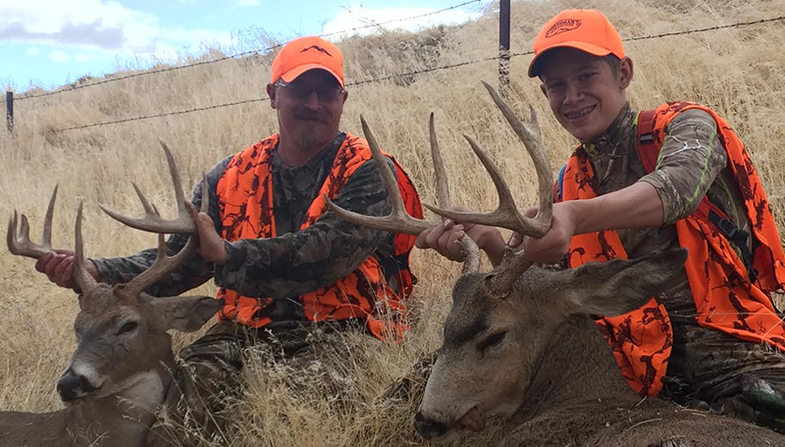 Maybe the biggest event in western deer hunting began this past weekend when Washington State’s modern firearm general deer season opened. Aaron Howell (left) and his son, Noah, of Kennewick, dropped these nice whitetail and mule deer bucks just two hours into the 2014 season. The events surrounding these kills are interesting — like that the bucks died 50 yards from each other — and so is the profound impact on deer movement during the week because of the intense hunting pressure.

The Evergreen State is the smallest in land mass west of the Mississippi, while being second only to California in population. While there are lots of blacktail, mule and whitetail deer in Washington, there are throngs of hunters pursuing them on a relatively small and largely private landscape. During modern firearm season in Washington, bucks become scarce once rifles begin reporting, and hunters often react to the pressure by seeking out unpressured islands of land or by banking on other hunters pushing deer. Hunting choice private ground above the lower Snake River breaks, the Howells did both. Aaron tells the story:

“The previous night we had watched a lot of deer feeding in the freshly seeded wheat field on the edge of the property, and we hoped hunters might push some deer into us. With 20 minutes left before legal shooting light we found a draw where we could sit with the wind in our face and have a view of the wheat fields, so we settled in to wait.

“We saw a lot of deer a long ways off, but nothing headed our direction. About 7:30 my son asked if he could do some jumping jacks to warm up, and I told him he should just walk around a bit and stay quiet. I stood up as well and turned my back to the wind for a few minutes and then asked my son if he thought we should stay where we were or move, and he thought we should move. I asked him where he wanted to go, and while he was thinking about it I turned and looked back down the draw, only to see a lone buck walking down the side of the hill on the right side. I looked at him through my binos and could immediately see he was legal, so I told my son to grab his gun and get ready.

“The buck walked straight into the bottom of the draw and bedded down facing us. I got a good look at him and told my son that he was a legal whitetail, and he should take him if he had a shot. ‘I don’t see a whitetail,’ Noah said, ‘but what about those other deer?’ I put my binoculars down and saw several mule deer walking right towards us up the draw. We watched them for a few minutes until they turned to our right and slowly made their way up the side of the draw. There were two legal bucks with the mule deer does, and Noah said he had a good shot at the lower one, who was only about 50 yards from where the whitetail buck was bedded.

Congratulations to the Howells on a well planned, well executed, and successful hunt.