Recurves are the Rodney Dangerfield of the crossbow world. Typically more difficult to cock and louder than most wheeled models,... 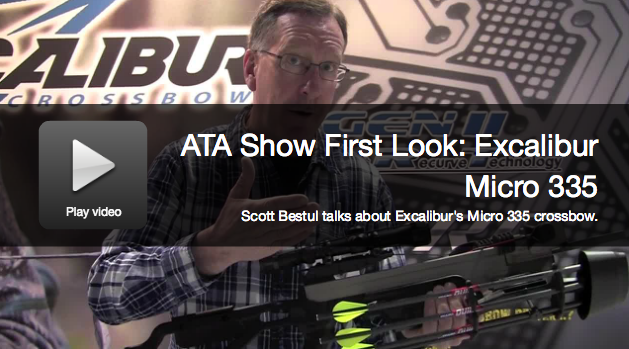 Recurves are the Rodney Dangerfield of the crossbow world. Typically more difficult to cock and louder than most wheeled models, recurves also lack the slimmer profile that’s currently in demand (not to mention the cams many people associate with speed and high performance). Some of that perception might change with the Micro 335, a recurve that sports a lightweight stock and narrow profile that makes it pleasant to carry and fun to shoot.

Hits: With a 22.5-inch axle-to-axle length (cocked), the Micro is over four inches slimmer than Excalibur’s Matrix, which we tested last year. The mass weight has also been dropped by a full pound, thanks to a Feather-Lite Skeletonized(TM) stock. I’ve shot a number of recurve crossbows over the last few years, and the Micro impressed me as quietest I’d ever used or heard used. The trigger is crisp, and the scope was among the best of the bunch.

Misses: At 335 fps, the Micro isn’t as fast as many compound models, so if blazing speed is important to you, pass this one by. And we weren’t allowed to cock any of the crossbows, so the jury is out whether the Micro has solved the hard-drawing issue to any degree.

What Else You Need to Know: Excalibur has a de-cocking device that allows you to relax the draw of a crossbow without firing an arrow. Ingenious.