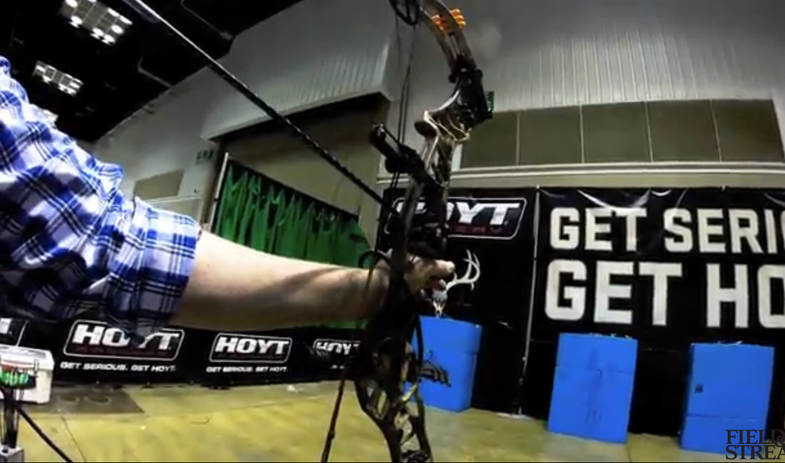 The biggest eye-opener in Hoyt’s 2015 line is the new Nitrum Turbo—and it’s 350 fps ATA rating. Hoyt has made a speed bow before, but this takes things to another level. Basically, the Nitrum Turbo replaces the 340-fps Hoyt’s Faktur Turbo, which placed second in our annual bow test two years ago. This one has some major differences, though—the most obviously being the completely redesigned and really bad-ass looking riser. The Nitrum also has a new, more aggressive cam and a totally redesigned roller guard made to minimize torque. The specs are 33 inches axle-to-axle, 6-inch brace height, 4.2 pounds, and 350 fps ATA.

Hits: It’s really fast—faster, I believe, than any bow Hoyt has ever made. The new riser, which has a cage on the bottom and an offset up top for greater strength and stiffness, makes the Nitrum the best-looking bow I’ve seen at the show so far.

Misses: There’s usually a price to be paid for an increase in speed, and there’s no exception here; the draw cycle is fairly demanding, with a noticeable roll-over and a narrow valley. The bow wants to go—which may not be a problem for the speed nuts out there.

What Else You Need to Know: Hoyt also offers the Nitrum Turbo in a carbon-riser version. It may be even more badd-ass looking than the aluminum one, and the bow is .4 pound lighter at 3.8. That said, you save about $400 by going aluminum without sacrificing any performance.