It’s always cool when talented, hard-working people are recognized for their achievement. Such was the case last week when F&S... 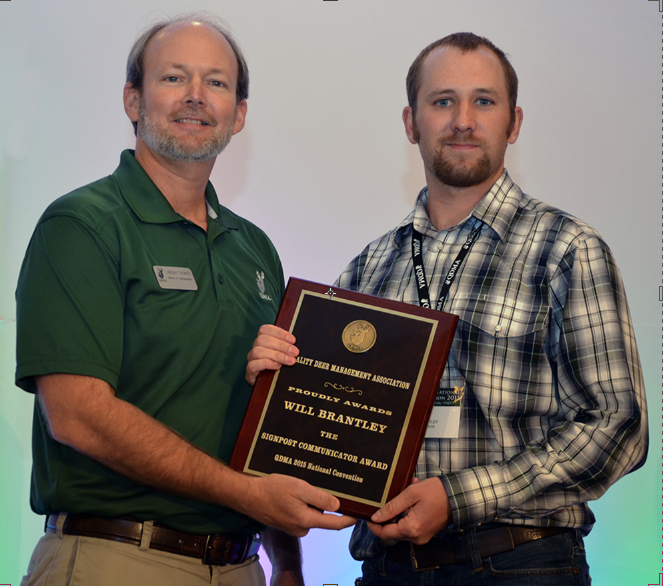 It’s always cool when talented, hard-working people are recognized for their achievement. Such was the case last week when F&S hunting editor Will Brantley received the Signpost Communicator of the Year Award from the Quality Deer Management Association (QDMA).

QDMA Communications Director Lindsay Thomas, who presented the award to Brantley at the QDMA annual convention last week, had this to say: “Three years ago, when QDMA first began raising red flags about the sudden growth and deregulation of the captive deer breeding industry, many hunters said they weren’t concerned because they didn’t shoot farm-raised deer in pens, but they didn’t see the harm if others did. Will Brantley wrote a blog in which he urged these hunters to take a look at QDMA’s full position statement to understand the broader risks of captive deer. He actually went out on a limb, writing: ‘I’ve got to stand with QDMA on this issue.’ It took integrity and courage as an outdoor writer to do that. He uses his journalism training and skills to acquire and share accurate information about deer for his readers, which is vital to the future of deer hunting.”

Brantley, besides being a talented writer and journalist, is a boots-on-the-ground deer hunter. While he’s hunted deer across the country, he’s happiest chasing whitetails and improving the habitat on the property he owns near his home in Murray, Kentucky. Brantley is also an avid turkey and waterfowl hunter and a zealous fisherman (to the point of intentionally sticking his fingers in the mouths of giant catfish and wrestling them from river bottoms).

Brantley interned at Outdoor Life while still in college, then went to work for FLW Outdoors magazine, Ducks Unlimited, and most recently Realtree Outdoors. Now he’s F&S’s newest editor. You’ve probably noticed that he’s been pitching in here on Whitetail365—but stay tuned, as he’ll soon have his own blog.