Goodbye to The Stranger Buck

Yesterday, with only three days left of archery season, I was doing a midday speed-scouting run, trying to figure out... 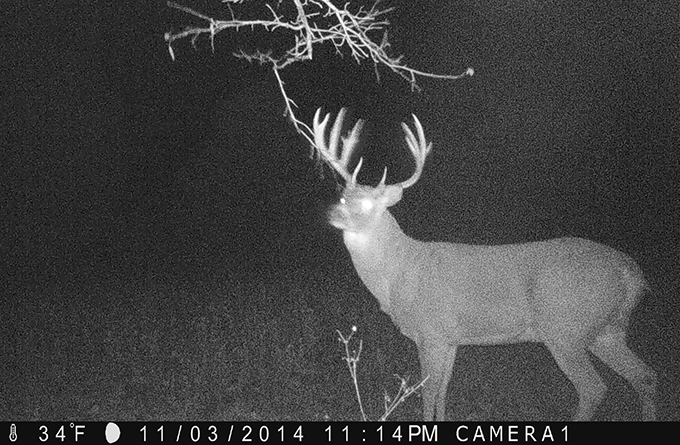 Yesterday, with only three days left of archery season, I was doing a midday speed-scouting run, trying to figure out where to set up for the afternoon hunt. As I approached a small food plot, I saw a bald eagle fly out of a nearby tree and thought, Uh-oh. In my experience, eagles are usually the first scavenger to spot a carcass, so I decided to keep my eyes open for more than just deer tracks.

I didn’t walk far before my suspicions about the eagle were confirmed. Lying on the edge of the food plot, his antlers tangled in grass and brush, was a buck my cameras had captured at least a dozen times. My hunting buddy Alan and I nicknamed him “The Stranger Buck” because he suddenly appeared on the farm in September, just after velvet shed. He hadn’t been running with any of the summer bachelor groups we knew about. And we were glad to see him; with his abnormal tines and stickers, plus a solid 8-point main frame, he was the kind of buck that got into your head—and could stop your heart if you ever saw him from a treestand.

We never did, of course. The Stranger, like many mature bucks, was largely nocturnal. But my pictures showed that he was loyal to the farm. Every time I hunted there, I thought maybe The Stranger would slip up and show during daylight. He was one of those deer that make a place a little more exciting to hunt.

I caught my breath when I saw those tall tines poking through the grass, and then, as I pried his body from the frozen ground, I felt a deep sadness. I couldn’t tell what killed The Stranger, but whatever the cause, he lived with the injury for a long time. His once-beefy frame was gaunt; his spine stuck up against his hide like a ridge, his ribs visible beneath his winter coat. One front leg appeared broken, so my guess is that he was hit by a vehicle as he chased a doe during peak rut. I’m hoping he bred her, and a lot of her kind.

Any time I forget how tough life can be for whitetail deer—especially mature bucks—I seem to get a reminder. This time it was the Stranger Buck. He beat me and my hunting partners six ways from Sunday, but he was not immune to the vehicles, buck fights, and many other mishaps that can turn a wily survivor into a carcass. Finding The Stranger was a bit of closure, but I will miss the thought of him on that farm.