See this buck? I’m hanging a pair of stands for him this week. Stands that I won’t hunt until late... 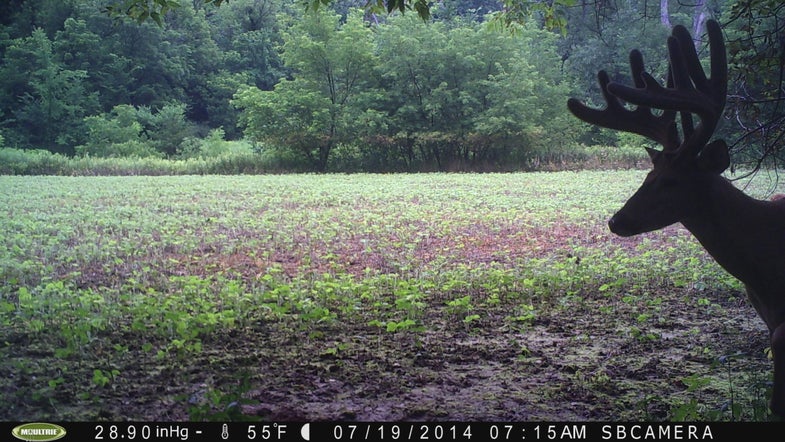 See this buck? I’m hanging a pair of stands for him this week. Stands that I won’t hunt until late October and November, when he’s running big and looking for does. As I said in Part 1, spring is the best time to scout your hunting areas and select stand sites for the rut. And now, in the heat of summer but weeks away from hunting season, is the best time to hang those sets. I don’t worry a bit about spooking this buck (a deer that, just to irritate Hurteau, I nicknamed “Butch Cassidy”), because I’m confident he’s not using either of the two areas I’ll invade right now. So what are those two areas? Well, first let me give you a general description so you’ll know what to look for on your ground. Then I’ll narrow it down to the specific spots I’m setting up for Butch.

[1] The General Spot: Late-fall bedding ridge. When temps drop and hunting pressure increases, whitetails bed in dense cover that offers them thermal protection and security. One of the best places to find both is a south-facing slope with thick conifer or brushy cover, which provides optimal sun exposure, protection from the wind, and gets a buck up high where he can see trouble coming and bail if needed. During the rut, bucks will make excursions looking for does, but they’ll routinely come back to a spot like this. And as long as you can get in unnoticed, this makes for a great morning or all-day set. Right now, heat and insects keeps bucks away, but they’ll be back starting in late October.

The Butch Set: The stand I’ll set for Butch is on a southwest-facing ridge end. It’s a tangle of sumac, red cedar, and white oak that was peppered with bedding sign and some good rubs when I walked it this winter. I’ll climb the steep hill leading up to the knob, clearing a slim access trail as I go. I’ll put the stand in a big cedar right in the heart of the bedding. After I cut some shooting lanes, I won’t return to this spot until the last week of October.

[2] The General Spot: A macro funnel. Everyone knows that bucks cover lots of ground during the rut and that terrain funnels help them do so quickly and efficiently. But some guys don’t think big enough. For the rut, you need to pull way back and look not for the pinch point between the ridge and cornfield but for the major corridor that connects several properties or big patches of prime cover. Right now, core areas are small and bucks don’t do a lot of funnel-walking; that makes summer the perfect time to hang a set in a ridge saddle, brushy fenceline, creek bottom, or sidehill bench.

The Butch Set: I’ll be hanging my second set for Butch on a bench that overlooks a tangled creek bottom full of willow, alder, and ash trees. The bottom is used by bucks running between three major ridgelines, and it’s hashed with rubs every year. But I’ve learned from hard experience that if I sit right in the sign, the wind will be funky. A scouting walk this past spring led me to a trio of trails that led out of that bottom and up to a hardwood bench, where I should have a true wind. And right there was a double-trunk basswood just begging for a tree stand.

Will Butch Cassidy walk by either of these spots later this fall, when I’ll have a bow in hand? Only time will tell, but I’m confident I’ve picked a pair of stellar rut spots on the 120-acre farm that this deer calls home. Identify just a few similar setups in your area, get stands hung in the next couple of weeks, and you should enjoy some hot rut hunting this fall.