Back in March, my neighbor Alan and I decided it was time to burn a 6-acre patch of prairie grass... 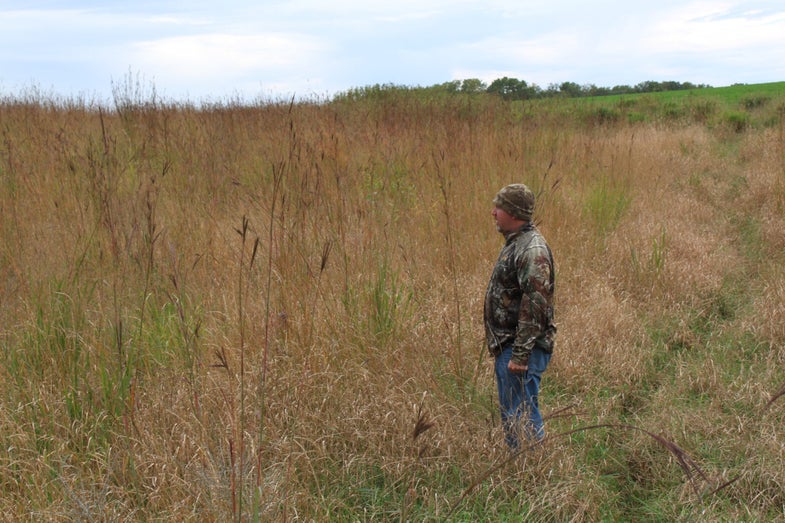 Back in March, my neighbor Alan and I decided it was time to burn a 6-acre patch of prairie grass we’d established four years ago. I posted a photo from that fire that showed habitat guru Ross Greden (backfortywildlife.com) lighting a “head fire” that scorched a section of grass in a wall of flame reaching 10-12 feet. In the aftermath of that burn, the ground was blackened — so thoroughly charred that it looked lifeless.

Within two weeks, however, tiny green shoots were popping up everywhere, and as the summer progressed, rain helped prairie grasses spread in both density and height. Even better, species that had not been present (or poorly represented) in the original planting suddenly took off. Big bluestem, one of the cornerstones of a tall grass prairie, was spotty in our original planting; now it’s one of the dominant species. And the response of these grasses to the fire has amazed us; as the photo above proves, this is one lush, tall patch of grass, with some plants reaching the 7-8’ mark.

What’s this mean for deer? Plenty. I’ve lost track of the whitetails I’ve seen entering, leaving, and simply disappearing into this dense prairie planting this summer. The grass has served as a fawning spot for area does and a staging area for deer leaving the nearby timber and heading out to farm fields to snack. Come November, the grass will see even more use, as bucks push estrous does toward it to breed, and whitetails pressured from firearms season (there are several blocks of public land nearby) will seek refuge there.

Five years ago, this chunk of ground didn’t constitute very good habitat for deer, or much of anything else. Now, thanks to one very hot fire, it’s a haven for whitetails, small game, and songbirds. Watching this progression has been one of the more enjoyable and satisfying projects I’ve been a part of in quite some time.