Every time I name a buck I chuckle, because I know Hurteau despises the practice. But so help me, some... 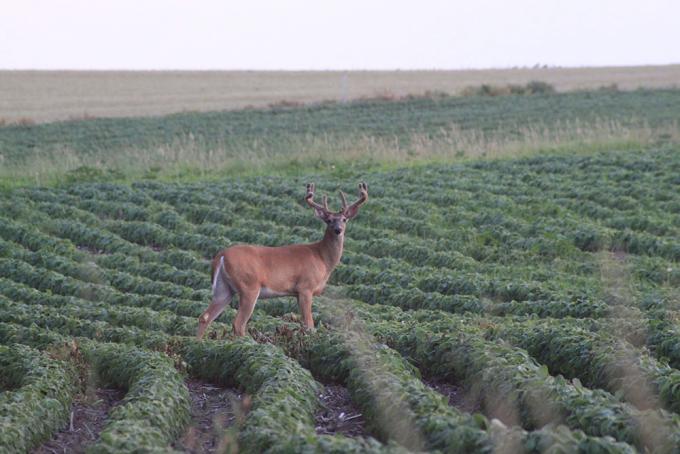 Every time I name a buck I chuckle, because I know Hurteau despises the practice. But so help me, some bucks just beg for a nickname. Take this nice 10-point that showed up on one of the farms I hunt. His rack was gorgeous, even in mid-June, and he was visible on a pretty consistent basis. But the quality that stood out to me was his personality; he just didn’t get excited about the presence of my truck as he fed nearby. Most mature bucks I’ve had the pleasure to watch are pretty intolerant of vehicles, at least vehicles they know are occupied. But this buck would look blankly at me as I glassed him from 50 yards, and then simply drop his head down in the beans and continue feeding. So—like it or not, Hurteau—he’s Mr. Mellow.

It’s too big a mouthful, but his name should actually be Mr. Mostly Mellow, because when he’s in the company of other bucks, it’s a different story. Twice I’ve seen him hanging with a smaller 8-point, a deer that’s so uncomfortable with human activity that he breaks into a sprint at the sight of my pickup. When Mr. Mellow is with The Nervous 8 (there I go again), he follows suit and starts sprinting as soon as his buddy does. I find it interesting that the younger, smaller buck dictates the behavior of his older buddy. Then again, my years as a high school English teacher taught me that group dynamics is an odd and unpredictable thing.

At any rate, I photographed Mr. Mellow once in mid-June and observed him on at least three other occasions. Then, like mature bucks often do, he started using another part of his home range and disappeared for about 10 days. When he reappeared this past weekend, I immediately noticed a strange, dark blob on the end of his right main beam. My first thought was that he’d ripped up a bean plant while feeding, and it was hanging off his rack. But when I swung the binocular up, it was clear he’d broken off the end of his main beam, including his 5th point.

Summertime bucks are pretty protective of their velvet-covered antlers, so it’s fascinating to me that this normally calm whitetail managed to snap an entire main beam (and not skinny one at that) at a time when he’s supposedly living a pretty sedate lifestyle. Then again, there are plenty of ways a buck can wreck a rack even now. All Mr. Mellow had to do was flee from a coyote, sprint off with a panicky buddy, or try to dodge a vehicle, and that soft, blood-engorged rack meets something hard and breaks like a brittle twig.

Whether that dangling beam will survive into the fall is highly suspect. If it does Mr. Mellow will be one very cool-looking buck. But my guess is that it will come off, either naturally or the buck will knock it off as it irritates him while feeding or traveling through dense cover. It’ll be interesting to watch this story unfold in the weeks ahead, and if I’m lucky enough to photograph him again, I’ll post an update.