Two months ago, we reported that a huge public-land buck taken by Stan Kreidermacher might threaten Minnesota’s non-typical, muzzleloader record.... 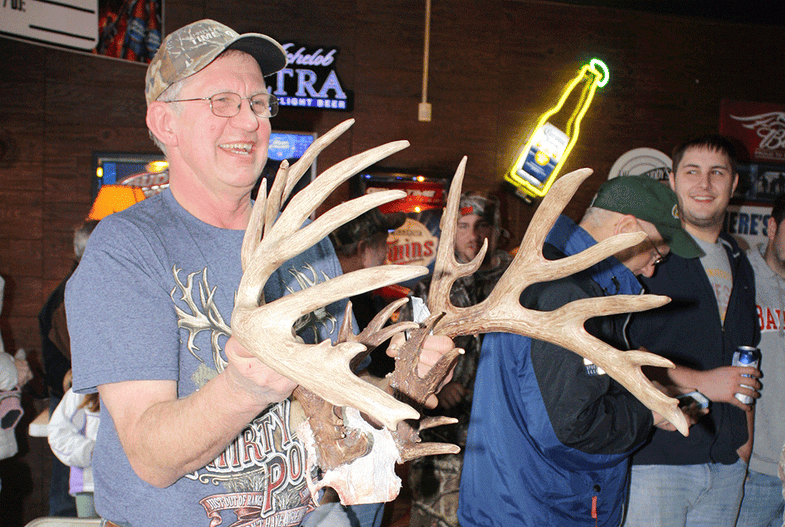 Two months ago, we reported that a huge public-land buck taken by Stan Kreidermacher might threaten Minnesota’s non-typical, muzzleloader record. This weekend, I witnessed the buck’s official, post-60-day-drying-period scoring session, and it’s settled: Kreidermacher’s huge whitetail, taken on the Whitewater Wildlife Management Area in December, is the largest non-typical ever shot by a Gopher State blackpowder hunter.

The official measuring was held at Pooter’s Sports Bar in Altura, Minnesota. Long-time Boone & Crockett measurers Dave Boland and Craig Pierce put the tape to Kreidermacher’s monster, which sported 28 scoreable points. When they finished, the buck netted 248-5/8 inches B&C, shattering the state muzzleloader record of 226-5/8, taken in Ottertail County in 2005. Kreidermacher’s buck is so big that it will rank 6th on the state’s all-time list of nontyps killed by any means—and 5th nationally for muzzleloader whitetails, according to the National Muzzle Loading Rifle Association.

Unlike several other monster-buck stories I’ve written about (or tried to write about) in the past, this one has been a joy to cover, thanks to Kreiderermacher himself, who has never viewed shooting the buck as a path to fame or money. When the measuring was complete and the buck declared an official state record, Stan pointed the antlers toward members of his hunting party and exclaimed, “We did it!”

Layton and Landon Kreidermacher— Stan’s nephews and the men who not only found the buck’s shed antlers last spring, but were on the drive that killed the deer—said it was simply “meant to be” that their uncle was the one to bag the huge buck. “It’s funny,” Landon said, “we had the sheds, and then a bunch of trail-cam photos, but there were other guys who came so close to getting that buck last fall. Even one of the guys in our party had a shot at the buck on the same drive and missed. It just seemed like Stan was the one who was supposed to get him.”

Everyone there seemed to share the same general sentiment—that it couldn’t have happened to a nicer guy. There are plenty of great people in deer hunting, for sure, but that fact isn’t always so obvious where trophy bucks are concerned. Yet, it was at Pooter’s Bar on Saturday.