Last Friday, Stan Kreidermacher was feeling pretty good about things. So good in fact, he says he contemplated buying a... 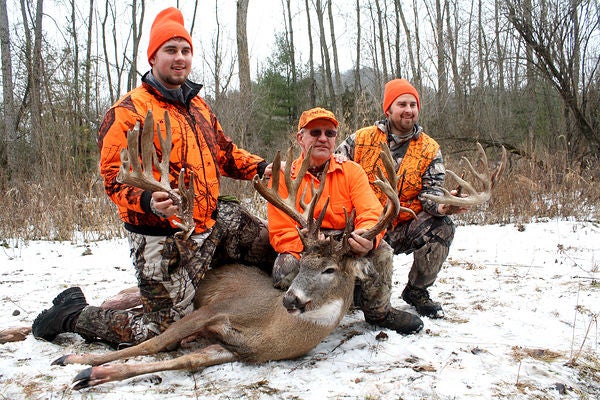 Last Friday, Stan Kreidermacher was feeling pretty good about things. So good in fact, he says he contemplated buying a lottery ticket. It’s probably best he didn’t, though, because the next morning Kreidermacher used up a pile of good karma on a monster public-land whitetail that could be Minnesota’s new state-record blackpowder buck. “It’s just the buck of a lifetime, and I was the one lucky enough to tag him,” Kreidermacher says. “I knew there was a big one in that area, but I had no idea just how big, or how many people were after him.”

The buck, a 28-pointer with a rack estimated to score over 240 inches B&C, was known by several nicknames to area hunters. “Some people called him ‘The Tower Buck’ because he was frequently seen near an old fire tower on a state WMA. Others called him ‘The Buss Buck’ for a local guy who had a bunch of pictures of him,” Kreidermacher says. “But my nephews called him ‘Mean Gene’.”

Kreidermacher’s nephews figure heavily in to his story because without them he might never have shot the deer. “Last year, my nephews, Layton and Landon, were pheasant hunting with their buddy Brian Ruhoff when they jumped a big buck,” Kreidermacher recalls. “So they came back in March to look for its sheds. They found one side the first afternoon, and the match the next day. They were pretty excited, I guess, but they didn’t talk to too many people about it, including me!”

They had plenty to be excited about; though the sheds had several broken tines, the trio estimated the buck’s gross nontypical score at 220 inches. Then they nicknamed the buck Mean Gene, an ironic reference to the quiet, friendly, neighbor who’d tipped them off to the pheasant hunting spot.

When the 2014 season opened, Kreidermacher’s nephews took up the chase for Mean Gene, but couldn’t get on the deer with archery gear. “I still didn’t know much about the buck,” Kreidermacher laughs. “I’d hear a tidbit here and there, just enough to know there was a big one around, but very few specifics. We all hunted the first gun season (MN has two shotgun seasons), and we made a push or two in the area, but never saw the buck. And we weren’t alone; I’d heard there were about 30 vehicles parked near that fire tower on opening day.”

By December, they still hadn’t glimpsed Mean Gene, but there was time. “We always hunt the blackpowder season and make some pushes, trying to get a few does for the freezer,” Kreidermacher says. “On Saturday morning we decided to push the area where the guys had found the sheds. I was one of the posters, and as my son Ryan was walking with me to get set up he said ‘Dad, if you’re going to shoot a doe, take your time and make sure there isn’t a nice buck behind her first, OK?’ I just kind of smiled, because we were talking before the drive that there was no way anyone was going to shoot this big buck everyone was talking about.”

There were 13 hunters in the group, and Kreidermacher was posting on a brushy hillside. “The drivers jumped Mean Gene in the middle of the push, and one guy shot at him early and missed, but that shot turned the buck back into the drive. Then another guy posted near me shot a doe, and as he stood there with an unloaded gun, guess who showed up?”

Kreidermacher was watching a group of eight or nine does moving through the thick stuff above him when he thought the heard a grunt. Searching, he finally glimpsed what looked like a heavy rack on the buck trailing those does, and he started starting looking for an opening. “The does were crossing the top of a ravine above me, and there was a good shot there,” he says. “So when I saw the buck’s shoulder hit that opening, I shot.”

Kreidermacher found blood pretty quickly, and had plenty of help from Layton, Landon, son Ryan, and Sheldon Luhman. “I guess my son got to the buck just seconds ahead of everyone else,” Kreidermacher says. “And then the celebrating began. One of the guys walked up on the deer, let out a huge whoop, and another party hunting a half-mile away heard it and came over. The buck was so well-known that they had a good idea what had just happened.”

Kreidermacher has plenty to celebrate. Mean Gene has 28 scorable points, a 20-1/2-inch inside spread, and tons of mass. Although he has to wait 60 days for an official announcement, Kreidermacher will likely have his name in the Gopher State record book for the largest blackpowder buck ever taken. “If my name is in there, in my head I know there’ll be a dozen guys whose names should follow, in parentheses,” Kreidermacher says. “It was just my day to kill that deer, and I know I’ll never see, much less shoot, anything like this buck, ever again.”