The Hunt for Hurteau Continues

If you’re a follower of this blog, you may recall that two falls ago I was lucky enough to tag... 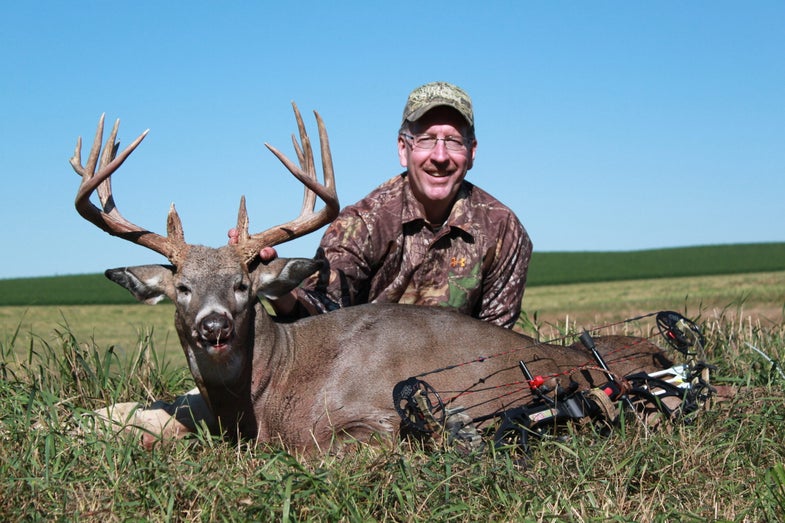 If you’re a follower of this blog, you may recall that two falls ago I was lucky enough to tag a buck one of our readers had nicknamed “Dave Hurteau.” The whitetail—which would gross 160-and-change B&C—was a fixture on one of the farms I hunt and appeared frequently on my trail cams. The standing joke was that I’d save the buck for the real Hurteau to shoot on a future hunt, but when the heavy, main-frame 8 point appeared one September evening, I wilted like a leaf and shot him. Poor Dave would never get a chance at the buck bearing his name.

Hurteau might, however, have a shot at that buck’s son or grandson.

Last fall my cameras picked up a buck that had strikingly similar antlers to the original Dave Hurteau. While the buck I shot was a basic 8-point, this year’s deer was a 10, but sported the forked brow tines and the start of the same distinctive stickers on the G2s that made the original Dave Hurteau buck so easy to spot. Because of those similarities, my hunting buddies Alan and Dave (a different Dave) nicknamed him “Dave Hurteau Junior.” We were trying hard to tag the buck, but as so frequently happens with mature deer, the whitetail had other ideas. By season’s end we assumed Hurteau Jr. had survived.

Just this past week, Neighbor Dave confirmed it when he found the shed right antler of Hurteau Jr. As the photo illustrates, the genes of the original Hurteau are appear to be present in the newer version. If all goes well for him, the new Hurteau should sport an even better gross score than his daddy, which will make him a very exciting deer to watch this summer.

Dave Hurteau—the person—has a standing invite to hunt here every fall. But sometimes scheduling makes that impossible. So the question will be, how much of a motivator will last year’s photos, and this year’s shed, and this summer’s trail cam pics, be for my editor and hunting buddy? Hopefully those factors will combine to get him out to Minnesota for a few days to chase the buck named for him. And hopefully—for his sake at least—DH Jr. doesn’t walk by me, Dave, or Alan before the real Hurteau shows up, because I can promise you that none us will pass him.