A few days ago I climbed out of a tripod stand on the last day of the Wisconsin bow season.... 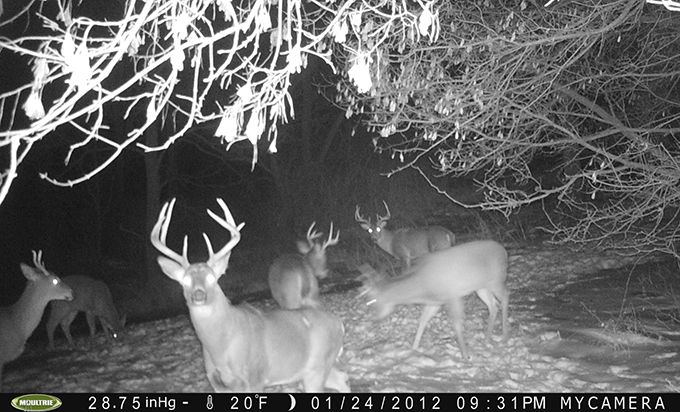 A few days ago I climbed out of a tripod stand on the last day of the Wisconsin bow season. On the long, cold walk back to my truck, I felt that little pang that comes at the end of another year of hunting. One of the mantras I chant during the season is: “There’s always tomorrow.” But last Sunday, that was no longer true.

So I was in a bit of a funk when the workweek rolled in and I contemplated the months ahead, with no deer hunting to look forward to. And then my neighbor Alan showed up, and we decided to go retrieve a ground blind from the field before the snow and winds of winter wrecked the thing. Before we left, and almost as an afterthought, I tossed a trail camera in the truck. Once we’d loaded the blind, I hung the cam, on the edge of a stubble bean field that the deer were just pounding.

And suddenly, instead of moping over the close of one season, I was smiling about the start of another. It was winter camera season’s opening day.

When I was a kid and only hunted with a gun, deer season started and ended in November. Then I picked up a bow and stretched it a couple of months. I don’t know when all this changed, when hunting whitetails became a year-round obsession of shed hunting, spring scouting, hanging stands, and planting food plots. For me it happened pretty gradually.

Obviously, I’m not alone with this condition. Hurteau and I named this blog in recognition of the endless passion modern deer hunters hold for their sport. Like many of you, I do the whitetail-365-thing just because I love deer and find them endlessly fascinating.

The start of winter cam season allows me to keep at it, at least in a way. I’ll take a mini-inventory of some bucks that survived the season and keep tabs on potential shed-hunting hotspots for the weeks ahead. But mostly, the cameras give me an excuse to keep going out there, to the places I love and that the deer call home.

Now if you’ll excuse me, I need to load batteries and SD cards.