I was hooked on Africa when I was 9 years old by the 1950 movie King Solomon’s Mines. The opening... 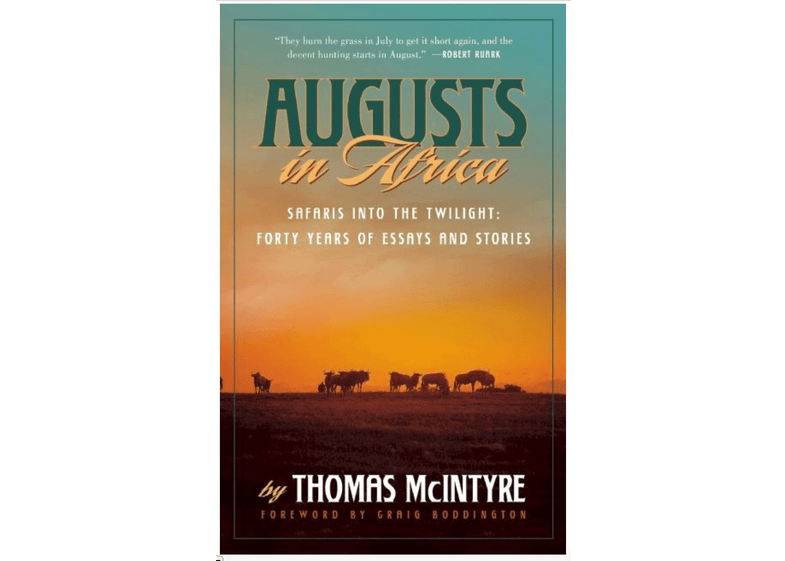 Thomas McIntyre's Augusts in Africa is a collection of stories and essays written over decades of African safaris. Skyhorse Publishing
SHARE

I was hooked on Africa when I was 9 years old by the 1950 movie King Solomon’s Mines. The opening sequence showed an elephant hunt in which a tracker was killed by a jumbo who was almost immediately shot dead by the PH. It was real, not staged, and being a bloodthirsty little monster, I was entranced. The next year I got hold of a book called Killers in Africa, by Alexander Lake, and became hopelessly addicted to Africa and African hunting.

So are a lot of people, but most of them never get to go. Time passes, and the money is spent for other things, and before you know it time has run out. Thomas McIntyre is not one of these deprived souls. Tom made his first safari in the 1970s and has been at it ever since. And he has been writing about it all the while. Augusts in Africa is a collection of what he has put down from the start to the present.

I’ve never seen a movie that showed what Africa is like, or a television show, and all but a very few of the thousands of books on the subject are exercises in ego, written by people who have an excess of money, bloodlust, and vanity. We went here, I shot this, the PH said that, and on, and on.

Africa is brought to you, for real, by people who have a gift for language and a different way of looking at the world. If I look at a buffalo track I can tell you that it was made by a buffalo. If a tracker looks at the same thing, he can tell the age and sex, and how big it is, and when it stepped here, and whether it’s hurrying or loafing along, and if there are any peculiarities to its gait, and what its state of mind is. That is roughly the difference between the average writer on Africa and someone of McIntyre’s ability.

Hemingway, in The Short Happy Life of Francis Macomber, wrote that the PH, named only Wilson, is described as having “…flat, blue machine-gunner’s eyes.” It takes a degree of insight and experience of the world and imagination to describe the pitiless stare of someone whose trade involves dealing in death every day in that particular fashion. That is why there was only one Hemingway. Robert Ruark, in Horn of the Hunter, described a Cape buffalo as a “vast, scabby, tick-covered destruction.” I read those words for the first time more than 60 years ago and I can still quote them. Three adjectives and a noun and they give you old nyati complete. No one but Ruark could have done it.

And that is the league in which Thomas McIntyre plays. There are two other things I should mention. Andrew Warrington, who did the sketches for the book, is a marvel, and I will let it go at that. And then there is the Foreword, which is by Craig Boddington (who has made over 100 safaris). In most books, the Foreword is more of an afterthought, quickly read and quickly forgotten.

As the horrible but insightful Bill Heavey says in his jacket blurb: “…McIntyre does what only the best writers can. He makes everything he touches new again.”