Book Review: ‘In the Company of Soldiers’ by Rick Atkinson

One of the more interesting deer-camp conversations I’ve listened to took place between a Vietnam-era SF captain who had left... 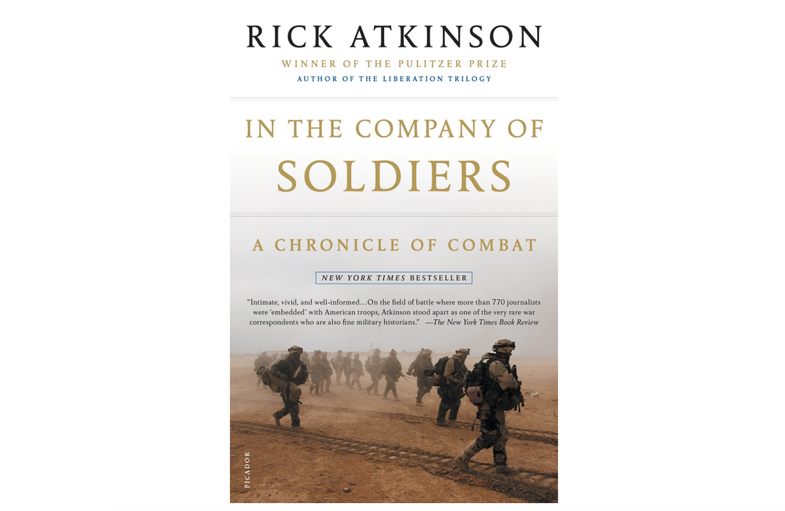 In the Company of Soldiers; BUY IT NOW.
SHARE

One of the more interesting deer-camp conversations I’ve listened to took place between a Vietnam-era SF captain who had left the Army in the early 1970s and a contemporary of his who had stayed in and recently retired as a full colonel. The former 06 became apoplectic about the suicidal tendencies of SEALs (just because you can bench press 400 pounds doesn’t mean you’re bulletproof) and then the subject changed to war in the 21st century, and how vastly different it was from our crusade in Southeast Asia.

“If you could command a division in combat at the time of Vietnam, you wouldn’t be able to command a battalion in combat today. That’s how much it’s changed,” he said.

War, now, is an enterprise of breathtaking speed and unbelievable complexity, and the best illustration of this is a remarkable book by the Pulitzer-prize winning reporter and historian, Rick Atkinson. Mr. Atkinson, who is the son of an Army officer, is something of a rarity these days in that he is not only sympathetic to men and women in uniform, but is highly knowledgeable about what they do.

In the spring of 2003, Atkinson, who was then a reporter for The Washington Post, was embedded with the 101st Airborne Division for our re-invasion of Iraq, and got to tag along with then-major general David Petraeus who commanded the Screaming Eagles, and watch him and his principal officers at work.

“Company” is subtitled “A Chronicle of Combat,” and that is exactly what it is, but it is also much more. Atkinson is that rarest of military writers, a man who can bring a large measure of humanity to the soldiers who have to do dreadful things by the very nature of their work. The only other reporter who could do this as well was Ernie Pyle, and he was likely the best who ever practiced the craft.*

Put a bit differently, Atkinson simply writes better than anyone else. Describing an American attack on a city called Najaf, he says:

“It was all so fierce, so terribly fierce, a symphony of fire. It was combined arms at its most lethal, the relentless orchestration of air, armor, artillery, infantry, and all the other killing modalities. It was combined and, in the Pentagon’s vernacular, it was joint, with the U.S. Army complimented by Navy, Air Force, and Marine aircraft. The U.S. military had for sixty years worked to make this the signature of American firepower, and no other nation could approximate such a synchronized application of violence. Until recently this synchronization had been the province of senior generals, but now I could see that it was routine for colonels and captains and sergeants on the battlefield to summon the genies of the air and the earth and the sea and sic them on the enemy.”

How does one do better than this? The answer is that one does not.

Petraeus, who went on to earn four stars, head the CIA, and then fall victim to an extramarital affair, comes across here as a compulsive, driven (“the most competitive man in the world”), and highly gifted commander (“sparks come off him”). It’s obvious that Atkinson likes him, and that the compliment is returned. It’s also obvious that Atkinson is very glad he doesn’t have to serve under him.

You zip right through this book and wish there were more. It’s $19 from the usual suspects. BUY IT NOW.

In 1943, Ernie Pyle wrote a newspaper column entitled “The Death of Captain Waskow,” who was an infantry officer killed in Italy. The piece won a Pulitzer Prize, and is generally regarded as the finest single piece of writing to come out of World War II. Waskow, like most Depression-era kids, had a grim childhood, and Atkinson, in *The Day of Battle, the second book of the Liberation Trilogy, describes what Waskow’s life and death were like. At the end, he writes: “Henry Waskow had never been young. Now, he would never be old.” I think Ernie Pyle himself would be pleased if he could read that.