Book Review: ‘Last Stand of the Tin Can Sailors’ by James D. Hornfischer.

Normally, I don’t read naval history. Ships and the sailors who man them are something to which I can’t relate,... 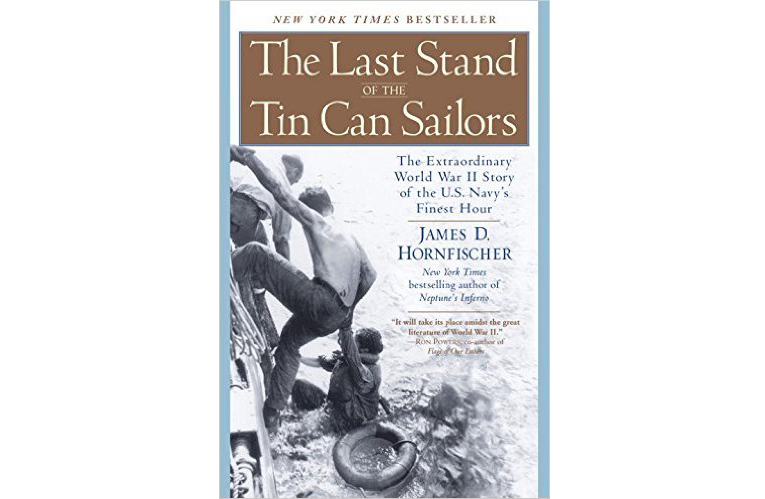 Normally, I don’t read naval history. Ships and the sailors who man them are something to which I can’t relate, and I got into this book only because Chuck Banks, who contributes to this blog, insisted that I do so. I’m glad he did.

It’s the story of the Battle of Samar, which was part of the much larger battle of Leyte Gulf. James Hornfischer sums up Leyte thus:

“The three-day series of melees around the Philippines in October 1944 was by multiple measures the most sprawling, spectacular, and horrible naval battle in history…It was the greatest naval battle ever fought for the distances it spanned, for the tonnage of ships sunk, for the duration of the duels between surface ships, and for the terrible losses of human life….

It was also what Admiral William F. Halsey called “the most glorious page in American naval history,” and ironically, it began with a near-fatal miscalculation by Halsey. When the American army invaded Leyte on their way to retaking the Philippine Islands, the Japanese, by now desperate, devised a plan whereby they would use their carriers to lure off Halsey and heavy warships of the American force protecting the invasion fleet, and then steam into Leyte Gulf and destroy everything, including the troops that had landed.

Halsey took the bait, leaving only a scratch force of destroyers, destroyer escorts, and escort carriers behind. It was a tin can fleet, so badly outnumbered and outgunned that it would be suicide to try and hold off the Japanese juggernaut bearing on them. But that’s just what they did. They attacked.

“…This will be a fight against overwhelming odds from which survival cannot be expected. We will do what damage we can.”

And with that, the Johnston and her equally puny sister ships made smoke and charged the Japanese armada, firing torpedoes and 8-inch guns until their ships were shot to pieces. Evans was killed; no one knows for certain how he died. He received a posthumous Medal of Honor.

But the Johnston and her fellow tin cans, along with Navy pilots who attacked furiously and incessantly, did an extraordinary amount of damage, so much that the Japanese commander became convinced that if he did not break off the attack, he would lose more ships than he could afford to.

James Hornfischer does a number of things here: He gives you the narrative of the battle, and paints poignant little pictures of the men involved. But most unusually, he describes how ships worked, and how gunnery operated, and what the sizes and weights and ranges of shells were, and what they could do, and the particular perils faced by Naval aviators.

And then he describes fighting at sea:

“Naval combat is nothing like ground war, but that does not make it any less terrifying. Death comes suddenly, shrieking down with little warning from the sky. If a two-thousand-pound projectile fired from long range has your number—if the lazy, decaying parabola of its trajectory terminates on or near your ship—you are finished, no matter how fine your reflexes or assiduous your training. In size and explosive power, naval gunfire in this war dwarfed anything in the Army’s arsenal. The biggest howitzer that Macarthur’s troops used fired a 155mm shell, about the same size as the six-inch rounds of the light cruisers. Battleship shells were several orders of magnitude heavier. When they struck they shredded armor, burned steel, and vaporized flesh. They killed any number of ways, by flame, by shock, by storm of flying shrapnel.”

So you stood your duty station fast and did your job in the full knowledge that there was nowhere to hide, and that you could at any instant be torn to bits, rendered into a bloody mist, burned, crushed, or boiled alive by escaping steam. The deck on which you walked, or crawled, was likely to be awash in blood and covered with the bodies and body parts of men who had been your shipmates, and alive, a few seconds ago.

If you went into the water you stood an excellent chance of drowning (many sailors could not swim at that time) because your flotation gear would become saturated after a day or two. Or you could swallow saltwater and lose your mind, or swallow oil and die from that. Or you could go mad, and swim away from whatever you were clinging to, or the sharks might get you. Or you might be picked up by the Japanese. Most sailors preferred death to that.

And at the bottom of all this was the knowledge that the Navy’s search and rescue operations during World War II were largely clusterf***s, as the sailors would put it. Luck had more to do with survival than anything else.

Then there were the odd moments, which Hornfischer also gives us:

A great many Navy pilots, having expended their ammo, bombs, and torpedoes, flew passes at the Japanese ships to distract them from planes that still had ordnance. One pilot drew his .38 revolver and fired all six rounds at the ship over which he was flying.

An Avenger pilot, Lt. (jg) Thomas J. Lupo, had actually thrown a Coke bottle and a navigation board at a Japanese vessel, but he now needed gas, and landed at an airfield at Tacloban, which was cratered by bombs and almost suicide to land on. He made it, but ran afoul of an American major who refused him gas and ammo on the grounds that they were earmarked for another unit. Lupo, unable to make the major understand what the stakes were, gave his revolver to his radioman, told him to kill the major if he tried to interfere, and commandeered a Jeep to find an officer with some brains. He did, and got his gas and ammo.

The crew of a sunken American ship, treading water in the Pacific, watched in dread as a Japanese ship bore down on them. Expecting to be machine-gunned, or depth-charged (the effect of a depth charge on a man in the water was particularly horrific, and Hornfischer describes it), or run down, they were astonished to see the crew lined up along the rail, at attention, in tribute. One Japanese sailor threw something to them. It was a can of tomatoes, packed in the United States.

This is a lengthy review, and the book under discussion is not about guns, our variety at least, but I think that our regular readers can appreciate it more than most people. In a time when “safety” and “protection” are two of the most important words in our national vocabulary, and when college kids opt out of taking exams because they feel stressed by the events of the day, Tin Can Sailors is something that you can read with appreciation … and with awe. Buy It Now.