Book Review: Should the Tent Be Burning Like That?

Why Bill Heavey’s new book is worth your time 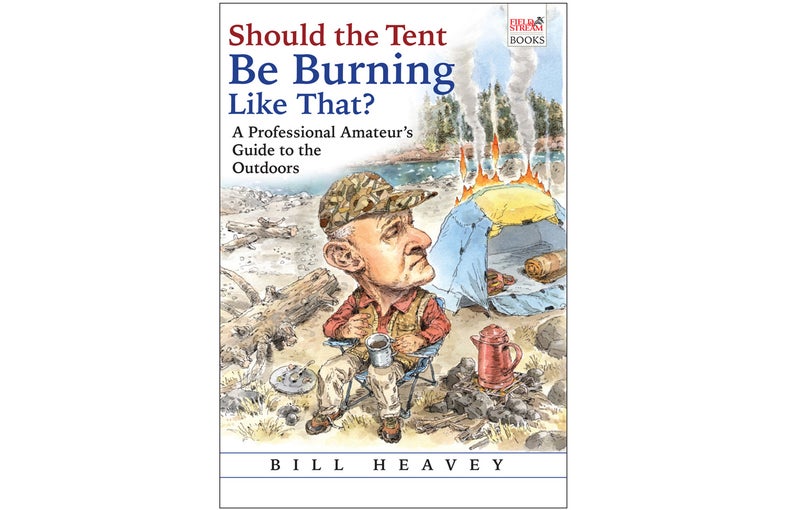 Should the Tent Be Burning Like That? A Professional Amateur’s Guide to the Outdoors, by Bill Heavey. 263 pps. Published by Atlantic Monthly Press. Hardcover, $25

THIS NEW BOOK is a collection of the best columns Bill has done for Field & Stream (and a few other publications) in the last few years, which is to say that it’s as good as anything anyone has written in any publication about anything. Give the Devil his due; Bill Heavey has a way with words.

The only Field & Stream writer who has been able to grab hearts and minds like him was Gene Hill, who also liked to present himself as a bumbler. But unlike Bill, who is the real thing, Gene was not. As a young man, he was movie-star handsome. He was a competitive trap shooter who had a room full of trophies. His wife was a former model. He was a magnetic personality who had legions of friends.

The world he put on paper was mostly sweet and gentle and wistful. It was summed up best by a fan of his, a young man who approached him at a field trial and said, “Mr. Hill, I want to thank you for saying all the things I felt and could never find the words for.”

Bill Heavey inhabits a different world. It consists of animals and fish that are much better at surviving than he is at killing them; hostile, malfunctioning inanimate objects; incomprehensible written directions; doe pee that refuses to stay bottled; human folly, rain, sleet, wind, bad luck, no luck at all and, because he is now in his 60s, when your friends start dying in earnest, sorrow, pain, and loss.

It was summed up best by a stranger who told him: “Man, when I read you, I don’t feel so bad about being me.”

The secret to Bill’s success was laid bare at a speech he gave last February to a club comprised of hypercompetitive hunters and fishermen in their 30s and 40s and 50s, all of whom are very successful in life and in their chosen sports. They’re as far from being amateurs as you can get. Bill started his speech by saying, “I realized very early on in my career at Field & Stream that I could make a career out of failure.” And he went on from there.

They loved him. They loved him because all of them, who compete against fellow club members, and themselves, and game animals and fish, and Nature, had been defeated time and time again, sometimes ignominiously. And they persist, as does Bill.

That is a Great Truth, and is the theme that runs through this book. As Hugh Glass said in The Revenant, “As long as you can pull a breath, you fight.” I trust Mr. Heavey will continue to milk it for all it’s worth.

Christmas is near. Need I say more?